Atlantic City is in the news lately, mainly for casinos that are closing faster than you can say "gambling addiction".  That, in and of itself, is a good reason to visit.  I have another reason though:  I've just always wanted to go to the shore in the Fall.  There's just something about the beach when it's cool outside that I find tempting.  Couple the two together and you have last weekend's "AC Getaway".

As a kid the only two vacations I ever remember were to Atlantic City.  Those were back in the pre-gambling days. 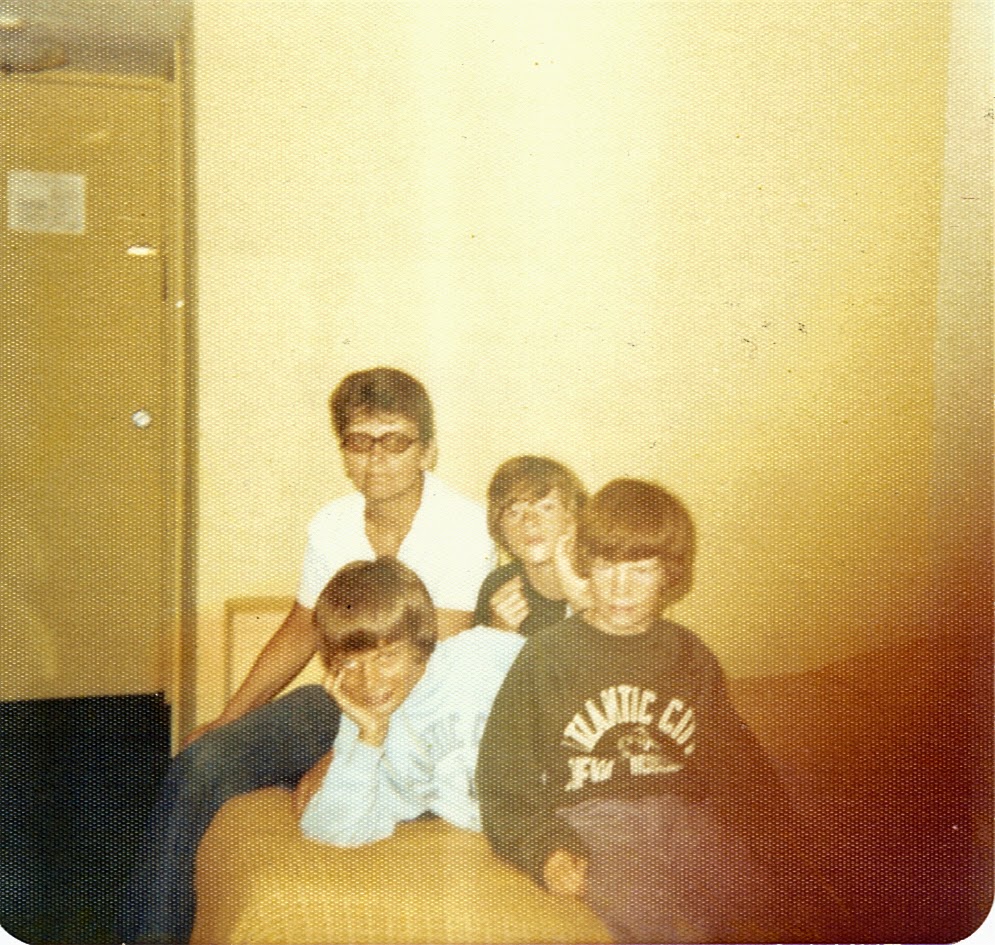 Now for a kid back in those days, a beach...any beach...was reason to celebrate.  It didn't matter if the beach in question was connected to a rotting resort town.  All I knew at the time was that the ocean was there; all other considerations were secondary.

Fast forward a few decades, and I've kept a special interest in "AC", and not because of gambling, mind you, as I really don't do that anyway.  Rather, it's more a connection my younger days, when eyes truly saw the positive in the midst of overwhelming evidence to the contrary.  Sometimes I wish I could get those same eyes back (something that many adults wish).

Last weekend's trip came about simply because, looking at the calendar for the rest of the year, I thought that Ms Rivers and I could benefit from a few days worth of escape.  Be it personally or professionally, the balance of 2014 is mightily booked for both of us.  Given that and my longing for simpler times, AC was the logical choice.  The fact that we already did a summer vacation week at Ocean City MD made the choice a bit easier.  Speaking of Ms Rivers, she also had some special childhood memories of AC, back in the days when her family had just returned from missionary work in the Dominican Republic.  What better a place to transition from a tropical island to the United States than the Jersey Shore of the late 60'/early 70's?

Casinos
Gambling floors were busy at the casinos we visited.  The fact that I think four major casinos have closed in recent memory probably helps the remaining venues tremendously.  Anyway, I've always thought that casino floors have a particular odor about them; think of it as being a combination of cigarette smoke and despair.

By the way, we lost a total of $19.06 in the casinos.  Not too bad for someone (me) who is too impatient to actually figure out how to wager on a slot machine.

I didn't take any pictures of the gambling floors, as quite frankly, they all look alike.

Hotels
It was interesting driving in to AC on Friday night, seeing some of the casinos completely lit up, like giant Christmas Trees, while others simply stood there, dark and stark.  Not wanting to be actual vagabonds, we did stay at one of the major resort hotels (sorry, since they are not paying me for a mention I will not be providing any free advertising).  The service was good by and large, and the room was fine for the price we paid.  The bed was a bit hard for my tastes, but that's just me.  The room did have a nice view. 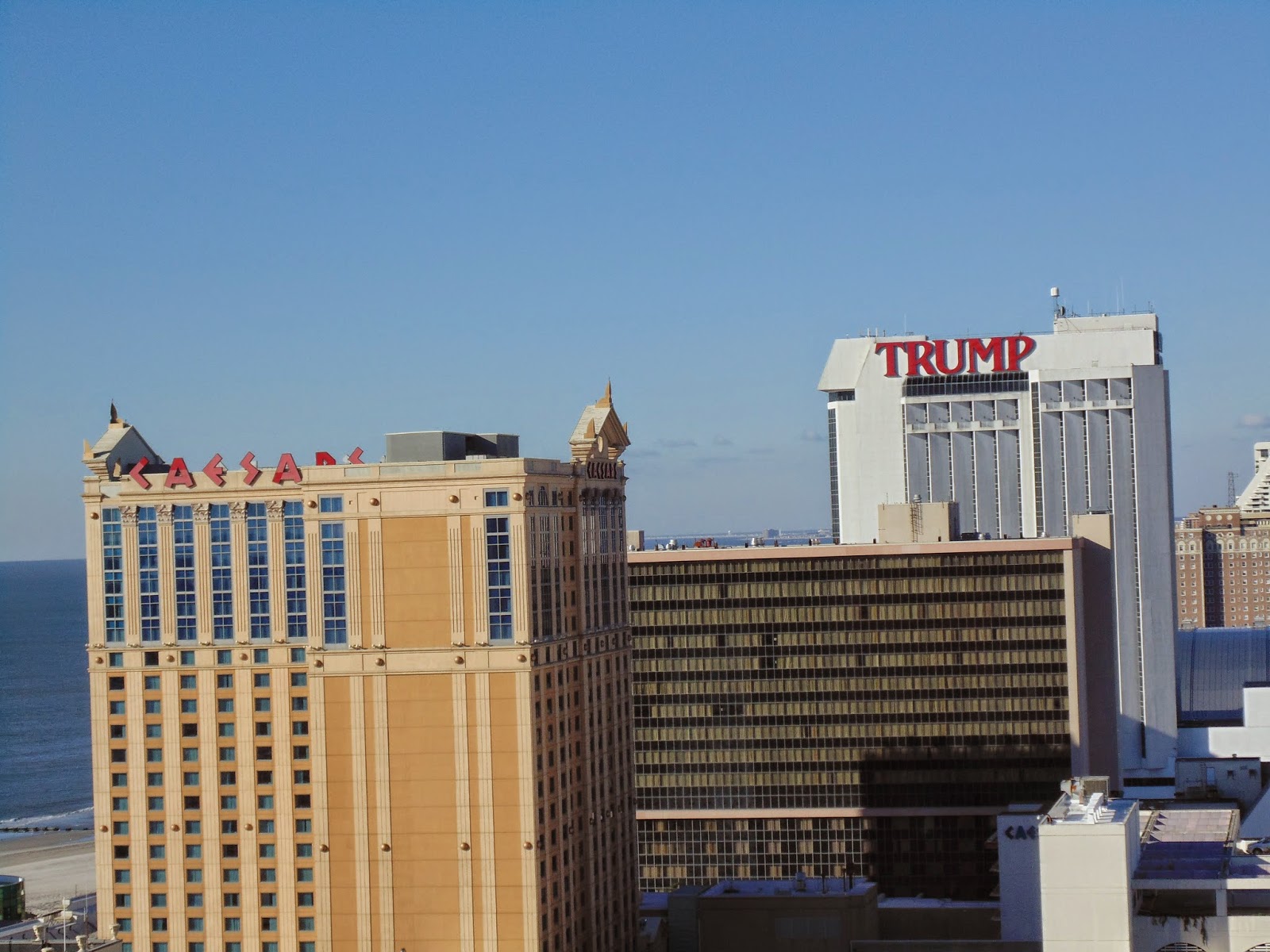 (Three casinos, two of which are actually closed)

We wandered into two other hotels and by and large most of these places are pretty much the same, with the exception of the Borgata.  More on that in a moment.

The Food
The food was inexpensive and good.  We had Italian one night and ate at an Irish pub the second night.  The Irish Pub had this sign, which I just had to take a picture of... 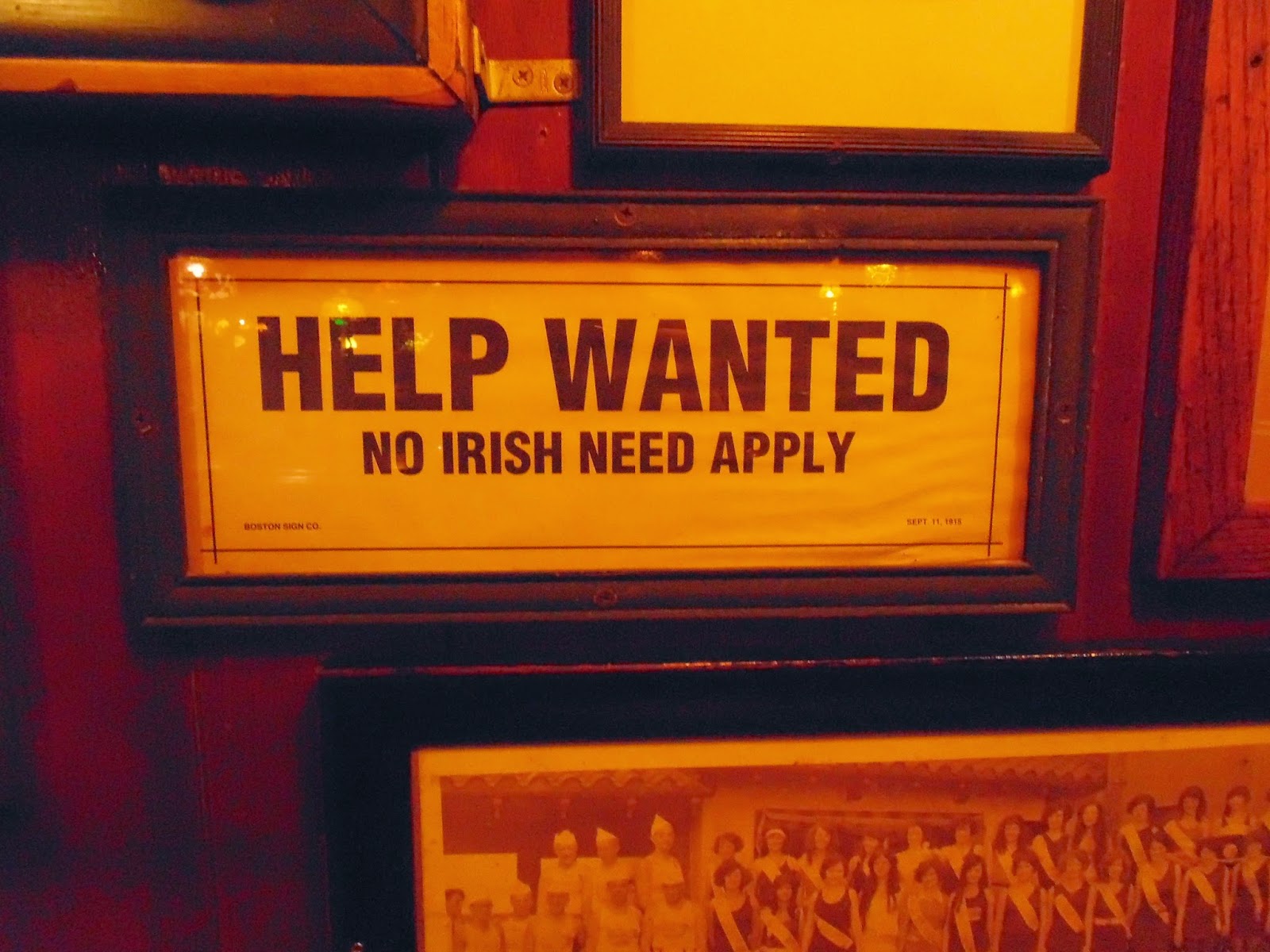 Just a twinge of the ironic in that sign, as I know a few NEPA residents of Irish ancestry that seem to take a dim view of current day immigrants.  Restaurant service was so-so, which makes me wonder what it is like when the town is actually busy.

The Boardwalk
We took many-a-stroll on the (famous) Boardwalk, the first being on Saturday morning.  It was pretty much vacant. 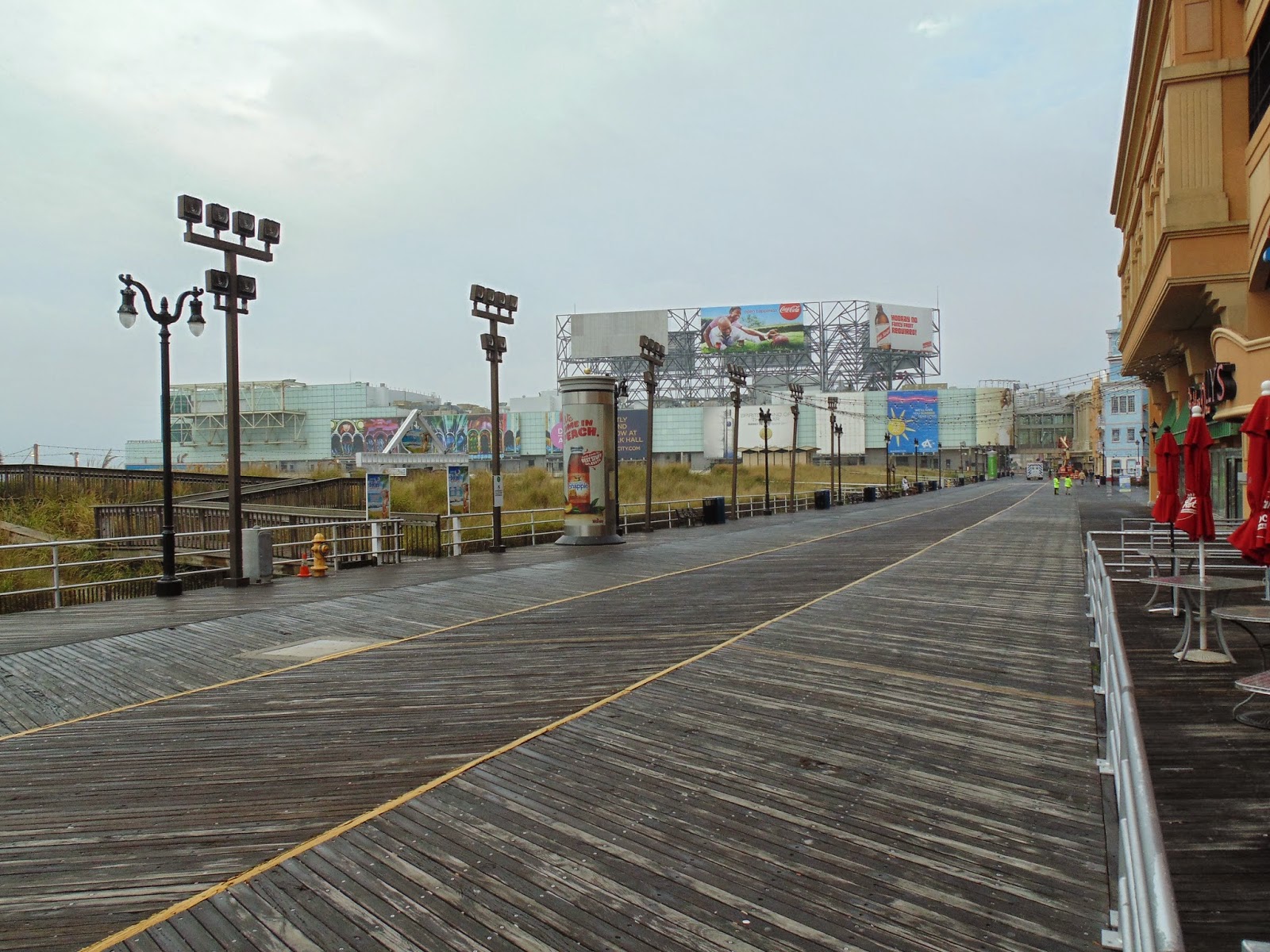 It was an eerie kind of feeling actually.  Now in all fairness, it was overcast and rainy on Saturday morning, so maybe we were just the only folks crazy enough to want to be out at the time.  As Saturday wore on the Boardwalk did get far busier. 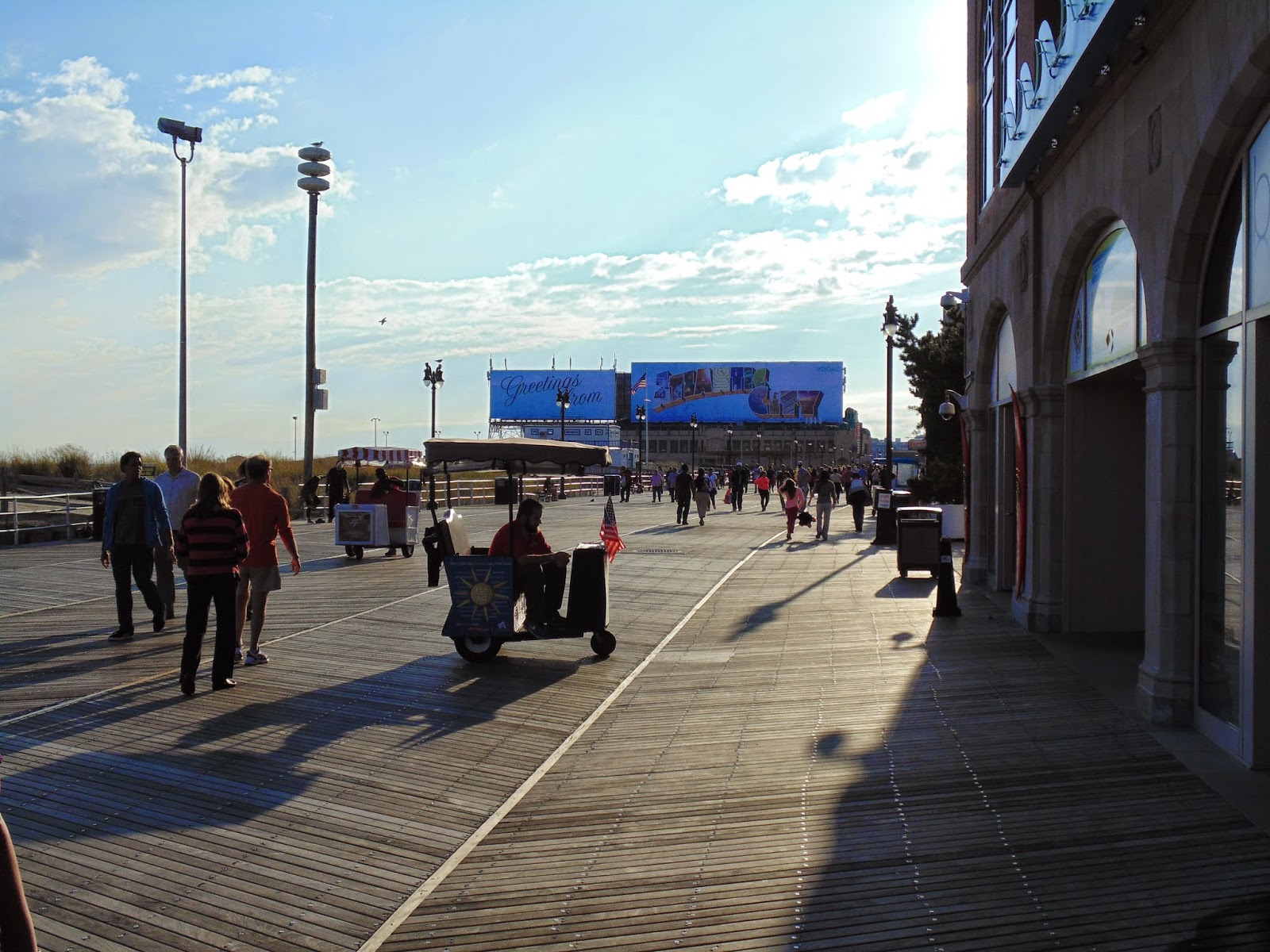 For the record, most of the folks I saw on the Boardwalk did not look like degenerate gamblers, although we encountered multiple pan-handlers.

The Entertainment
Saturday night we went to see comedian Brian Regan perform at the Borgata.  For those not in the know, the Borgata is not on Boardwalk, but rather is in the marina section of AC.  It's a little bit of a drive, but worth it.  The show as pretty good, and the Borgata is exceptionally impressive...a world-class, high-end resort.  I can see why that particular venue is apparently doing very well:  it simply out-classes all the competition.

Other Thoughts
A few other random observations about AC in October:

Would we go back?  Absolutely!  It was, all in all, a fun and relaxing time.  I'm not sure I would go during the heat of the summer, but as a relatively easy spot to get to, AC is a nice choice to visit off season.
Created By Stephen Albert at 4:08 PM