Today's Wisdom, from the Facebooks

Courtesy of the page Kissing Fish. 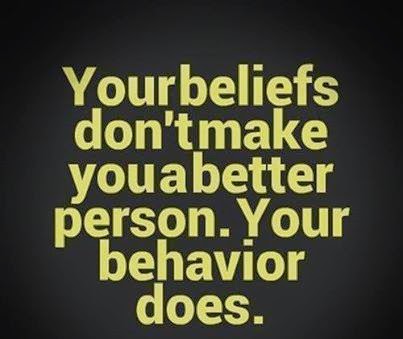 Whether your consider yourself conservative or progressive, I think we can all agree actions mean far more than beliefs.  That's not to say that concepts like "belief" fail to impact what we do, but ultimately, as a wise person once told me, adults are absolutely responsible for their own behavior*.

So my recommendation to the Limousine Liberals and Tea Baggers alike out there is as follows:  stop talking about your beliefs (especially religious ones) and instead start putting those beliefs into into action.  Maybe start with acting on a sense of compassion for the sick and work your way from there.  The world will be a better place for your efforts.

I'll freely admit, however, that I have progress to make in the above referenced department, but I'll also note that I do try.  In the end, "trying" is a behavior.


(*) As a side note, from a mental health perspective adults are either:

a) Free to live out on their own, making life decisions and being responsible for their own behavior

b) They are/should be institutionalized because some legal authority has determined that they can't function on their own.

Except of course in the case of someone who was institutionalized but then released prematurely, I do not believe there is much of a middle ground between the above statements.  Those who are suffering from mental illness and who are yet able to function in society absolutely carry a tremendously great burden, that's for sure, but part of that burden isn't just the illness...it's also the fact that they are responsible for accessing and acting on the treatment available to them, both from pharmacological and other avenues (such as counseling).  Put another way, those suffering from mental illness are not responsible for that illness, but they are responsible for what they do about that illness.

Created By Stephen Albert at 7:42 PM