Redundancy in action...Ask a Canadian to say "About a boot".

Speaking of Canadians...I still keep wondering if the house prices you see listed on the various HGTV series are in dollars or loonies.  The latter may help to explain why they show janitors buying $300,000 homes.  I know I've pondered this before, but it just throws me for a loop, mainly because I watch so little TV I guess (and of what I do watch, 60%+ is the previously referenced HGTV).  The solution is to either watch more TV to balance things out or watch less.All the more reason to watch "Nicole Curtis: Rehab Addict", which is proudly made in the U.S. of A. 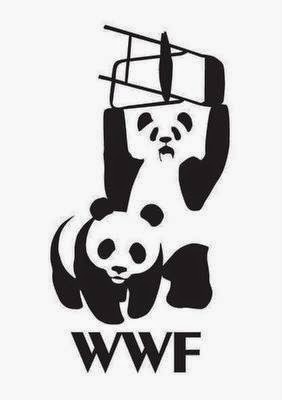 The Noah Movie...It's an interesting study in the way human being think to watch (and/or listen to) the reactions to the new Noah movie.  I've heard that some evangelical Christians are really incensed that the movie seems to take liberties with the biblical account of the flood.  Here's a sample, also from the Facebooks: 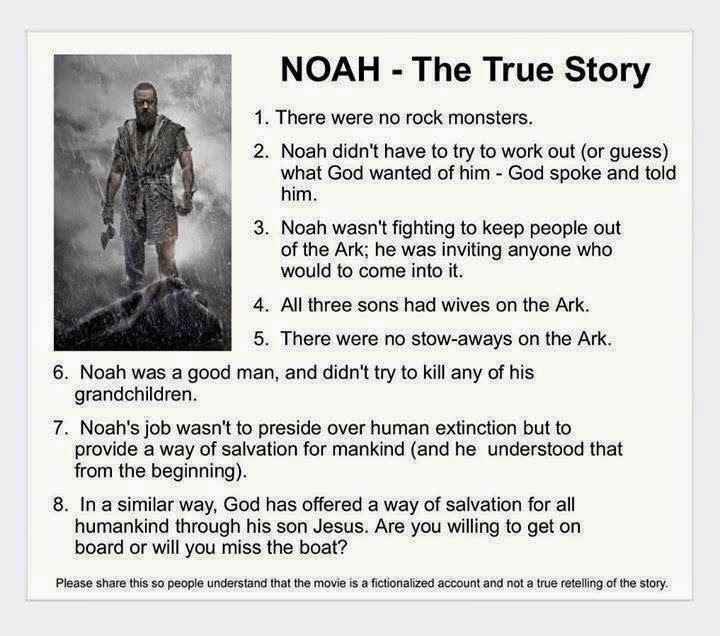 Now as I understand it, the biblical account of the flood isn't movie screenplay long, so of course any movie about Noah and the flood would need to take some liberties.  I'll also note that the "real" Noah didn't speak English with an Australian accent either, but I think the point is made.  Speaking of points, consider this:  from one perspective, this is an example of people getting upset at the fictional telling of a fictional story.

Speaking of religion...I finished The Pope and Mussolini and am just about finished with another book that I put down in order to read the Pope book.  Next up?  Eternal Life: A New Vision:  Beyond Theism, Beyond Heaven and Hell by John Shelby Spong and The Protestant's Dilemma by Devin Rose.  It's a kind of yin-yang deal I have got going.  For someone who is not overly religious (although I do "confess" to praying), I do enjoy reading about religion and religious philosophies.  I wonder why?  Well part of it started back when I was in high school and I read every single book the Scranton Public Library had on the subject of the Church of Jesus Christ of Latter-Day Saints.  I didn't read the books because I wanted to convert, but rather because I was simply fascinated with something so very different.  Going back before high school, I'm convinced that the fact that I was raised a strict Catholic and knowing nothing about other religious (well, other than the fact that I was told they were "wrong") made me all the more interested in other religions.  Anyway, I've probably read a hundred or so books that either directly or indirectly deal with religion, and I've yet to read anything that would even remotely cause a conversional stir in my bones...but I still find the subject matter to be interesting.

Glenn Beck...is being sued for defamation of character.  Story link HERE.  Ironic that someone who throws verbal bombs for a living is being sued for accusing someone else of being involved in a real bombing.  One does get the impression that Mr Beck really, truly wants to be taken seriously.  Of course it would help if he would stop acting like an ass-clown, but I suspect that he's no more capable of making that leap than my cat JeanLuc is capable of actually answering me when I talk to him.  Anyway, with Glenn Beck it's important to consider the source; Charles Krauthammer he is not.

On Writing...I tend to write the Road Apples postings in chunks.  For example, this posting started with the first two points one evening, then a few were added this morning.  It's now Wednesday evening as I write this, and quite frankly, it's time to put this bad boy to bed.  But not without one more item.

Staff Meetings...Today and tomorrow are full team staff meetings in my little work corner.  That means folks from three other locations coming to Scranton for a day and a half of meetings and the like.  For me, it's a difficult time.  Simply put, it requires so much extroversion when these things occur. All the activities are designed around what gives extroverts energy.  It's a energy drain, such that by the time everything was done for today at about 7pm I was mentally and physically exhausted.  I have no more to give.  I really don't want to do much more talking.  I want to write, read, and maybe watch a bit of TV.  Tomorrow is a new day full of extroversion.  No doubt I'll be beat by the time it ends.  Maybe I should have become an engineer after all.
Created By Stephen Albert at 8:31 PM

Email ThisBlogThis!Share to TwitterShare to FacebookShare to Pinterest
Labels: Me, Me (Professional), Media, Religion, Road Apples