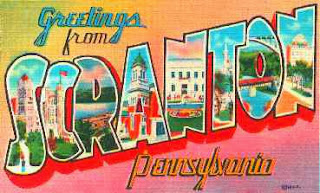 In the song "Say Goodbye to Hollywood", Billy Joel wrote the line...

...which is a fitting way to begin this posting.

Yes, after spending the last 25 or so years of my life being a second time Scranton resident (I was born in Scranton but left the area in 1984, returning in 1989), the Electric City and I have parted ways again, probably forever.  The new home for NCFE...and it's author...is the thriving and at the moment not under water* town of West Pittston.  In Scranton parlance I am moving to Wilkes-Barre, as every good Scrantonian knows that everything past Avoca is actually Wilkes-Boro anyway. Or so I was led to believe growing up.

Anyway, I have known that this day...or a day like it...has been coming for a while now.

Back in 2010 I made a series of changes in my life that put me on a path where it wasn't particularly clear where I would end up, physically, mentally or otherwise.  It was a trying time, and I made some very difficult decisions; good or bad though, there are times in everyone's life where something of a leap of faith is required for there to be any true progress.  Sometimes this progress requires a stripping away of things first, and in October 2010 I had been completely and thoroughly deconstructed.  From there the reconstruction began.  I had no idea then where I would be now, which for me truly is the miraculous thing about faith.  Now that reconstruction begins to pay visual dividends.

For the record, my definition for "faith" isn't necessarily about religion, but rather it's those big things you do when you don't necessarily have the benefit of data to support your decision. Mind you, I say this as a true Science Geek.  Anyway, faith is what you do when your head isn't of much help in the decision making process and your heart is hopelessly lost in the fray.  Faith is what's left when logic and reasoning use up all their ammunition.  I consider myself to be a highly logical and ordered human being, yet even I understand that there is a place for faith in one's life.  Faith, as much as anything else, brought me to where I am now.

Fast forward over from October 2010 and I'm turning one of those big corners in life.  You know, one of those corners that you look back on in later years and say "that's when it really changed".  And it is really changing now.  A small part of me is a tad bit, well, is almost afraid to be happy at the moment, as if there is some cosmic mojo that will be offended if I allow myself to be contagiously happy for a moment in time.  To that part of me, that feeling, I proudly proclaim the following: "Nope, not this time Sparky!".  I will enjoy this feeling, if for no other reason than the fact that I don't plan on making such moves again for a very long time to come.

As for Scranton, well I wish I could say I was optimistic about the future of the city that really should be the anchor of Northeaster Pennsylvania.  Scranton, however, has yet to hit its nadir.  While things are bad, they will be getting worse.  Probably much worse.  Like an alcoholic, Scranton is still in the...

...stage.  I don't see this changing any time soon.  Reasons?  I've written about this subject time and a time again, but it all comes down to this:  in Scranton, political logic always trumps reality.  The political logic of not wanting to offend city employees, for example, is currently far more compelling than the reality that Scranton can not afford its current workforce.  When that changes, as painful as it will be, will also be the time when Scranton turns the corner.

So goodbye Scranton.  I will be visiting, often.  Part of my employer's office is technically within city limits, and I have two beautiful college-aged daughters living in the city anyway.  I'm also not changing Scranton-based dentist and primary care physician, both of whom I have learned to trust over the years.  For those that remain in Scranton, well I wish you all the best.  Oh, and one last thing:  for God's sake vote.


(*) As in H2O; it's ironic in that I am leaving Scranton, a town that IS under a different kind of water.  For the record, my new home is not in a flood zone.
Created By Stephen Albert at 6:17 PM

Email ThisBlogThis!Share to TwitterShare to FacebookShare to Pinterest
Labels: Me. Deep Thoughts, Scranton