Blog Geek...I once in the while find the urge to make subtle changes in stuff on the blog, which was the case yesterday.  Most of said changes are just to amuse myself.  Once in a while it is to amuse someone else.

Scranton...I have been fighting the urge to write about Scranton's financial condition, as smarter people than I are writing about the whole mess.  I may just give in to the urge.  Anyway, I read one morning in the Scranton Times that City Council President Janet Evans is refusing to have council write its own recovery plan until:

1) The Mayor acknowledges that she is smarter than he is...
2) The Mayor appears at a council meeting to be questioned by the lady who invokes Jesus all the time...
3) She gets her disability pension from the Scranton School District...

Man, this is degrading already.  I think I need to quit while I am ahead.

Battleship New Jersey...It was great visiting Philadelphia weekend before last.  As a kid who put plastic models of ships together, I was on one level prepared to visit the New Jersey...I knew the basic ship layout, the armament (16" main guns, 5" secondary guns, etc.)...but on another I wasn't really prepared.  The ship was, I guess, actually smaller than I suspected.  Maybe that's because I'm bigger now than I was when I used to put those models together.  When you consider that something on the order of 1600 sailors at a time served on the ship it seemed even smaller.  It was also saddening as well, in that the front deck of the ship is in need of repair.  Even more sad?  Looking across the Delaware river and seeing the Olympia, slowly rotting into the river.  Ah, the joys of growing up.

Furniture Madness...I am donating my computer desk and hutch (both made of lightly finished pine) to my oldest daughter Katrina.  I've had both for maybe 8 years of so, and it was just time for a change.  Besides, I wanted my daughter to have some nice stuff, unlike me, who just starting out I had, well, nothing.  As far as a replacement is concerned, well there is a not-too-distant-future trip planned for the IKEA, where I have a rather interesting looking office set-up already picked out.  Think something like this: 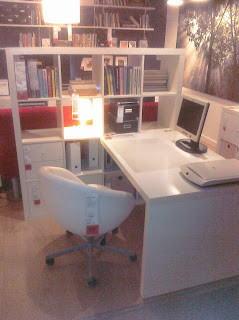 Of course the down-side to all of this is that I had to disentangle all of the wiring associated with my technology set-up.  Well, since I actually like doing that sort of thing, maybe it's not such a down-side after all.

Work News...We have visitors from other offices coming to work today and tomorrow for thrice annually staff meetings and such.  It's always nice to have folks come to Scranton, even if some of them believe that the area is a back-water hell hole filled with gun-toting hillbillies.

Monsignor Lynn Verdict...Still no verdict in the curious case of Monsignor William Lynn.  Reference HERE. I have been following this the trial started, and it's fascinating stuff.  Personally I think Monsignor Lynn tried to do the right thing but is now being used as a scapegoat for the hierarchy in the Diocese of Philadelphia.  This case should be required reading for every Catholic, as it is very instructive as to how the Church actually works.
Created By Stephen Albert at 7:58 AM

Email ThisBlogThis!Share to TwitterShare to FacebookShare to Pinterest
Labels: Me, Me (Professional), News, Religion