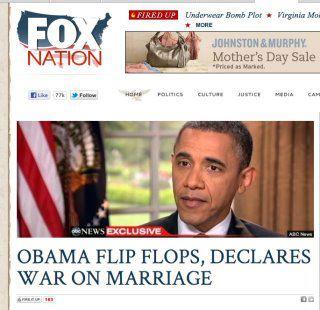 Yes, the "Fair and Balanced" network declared that the President "Declares War On Marriage".  Now I realize that other media outlets are slanted left and Fox is the conservative alternative, but seriously, "declares war"?  On what planet is this even rational?

I know, in the minds of Fox News editors this is a better headline than, say, "Murdoch Declares War on Phone Privacy".


Courtesy of the coolest guy on Facebook, George Takei.

Created By Stephen Albert at 6:20 PM

Email ThisBlogThis!Share to TwitterShare to FacebookShare to Pinterest
Labels: Media