It's Been A Bumpy Ride

Spring 2022 has been rather bumpy.

Now normally, come later in April my mood tends to perk up a bit.  There are flower planting rituals to be followed, plans to be made, and schemes to be plotted.  April started out good enough, but mid-month we had snow on a Sunday, and it was as if a mental emergency brake was pulled inside my head.  Granted we are not talking about anything significant in terms of actual snow, but that wasn't the point.  The disappointment was the point.

Now that we are in mid-May, and Spring has more forcefully sprung, it feels as if I am playing catch-up.

The flower-planting ritual is supposed to ground me.  To make me feel better.  It's a part of my seemingly never-ending quest to feel as if I have some control over things, all the while acknowledging that, in reality, we really don't actually control all that much.  My reaction to April snow is proof-point #845 to that last sentence. 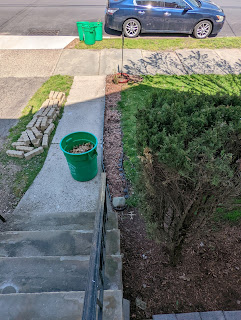 (the front flower-bed, two weeks ago)

So here I am here now, it's a warm Sunday evening, and I think I worked reasonably hard this weekend.  I know, weekends are supposed to be relaxing, not excuses for hard work.  Especially when it comes on the heels of sheer, utter exhaustion, courtesy of about 5 hours of sleep Friday night into Saturday morning.

Now I don't consider myself to be a stupid person.  Granted, there are some areas where my lack of intelligence borders on the glaring, but by and large I am capable of telling "Sh*t from Shinola" when it comes to most things.  That noted, I still struggle greatly with sleep in general and feeling rested in particular.  It's a kind of puzzle of the worst sort.

In the back of my head, and as my late brother Chris' birthday approaches, I can recall countless discussions with him about how his own sleep issues were a significant stressor for him.  Now I know that Chris' sleep issues were just a sliver of his story for sure.  Yet it's just another bump, not unlike most of the roads in this area.

So where does this end?  I don't know.  I do know I have more flowers to plant.  And a decorative sidewalk to put in.  And a new border to put in around my front bushes.  Part of me gets tired thinking about it, yet I also know that, deep down, these kinds of things are important.  Every flower and every project (small or big) helps me feel alive.  In the end, what's the alternative?  We all need small things in our lives that matter.  Even when exhausted.

Anyway, here's to a smoother ride.

And here's some Supertramp.

Created By Stephen Albert at 9:56 PM

Email ThisBlogThis!Share to TwitterShare to FacebookShare to Pinterest
Labels: Family, Me, sleep