The first is (hopefully) winter.  In some respects, it has been one of the most difficult winters I've had in a long time.  This is how I suspect difficult years end, by the way, in a kind of last gasp.  And I can't even claim to have had things all that bad, by most practical measures.  What I can claim though is that, for the most part, this is not how I imagined my life would be at age 50-something (I am too tired to do the math...at some point, you just stop counting anyway).  That's not a measure of what you might think, by the way.  I would have hoped that I would just have more of this "battles inside my head stuff" figured out.

Was it always this way?

That's a great question.  I think that, in the past, I always had what I'd call bumpers to my life...things that basically forced me to just plow through stuff.  These are the things that good husbands and fathers do.  Think along the lines of "I don't know what the Hell I am doing, but I'm just going to do it anyway".  With age though, some of those things just go way.  Kids grow up and become successful.  Marriages end and begin again.  Before you know it, there is nothing left to distract me, and here I am, left to answer 40 years of "why" questions.

Maybe, just maybe, Spring is part of the answer.  A kind of magnificent metaphor.  No matter how horrible the Winter was, between bad weather, pandemics, and insurrections, the snow piles dwindle into nothing and Spring comes.  Maybe I just need to stop thinking so much and just enjoy the coming flowers. 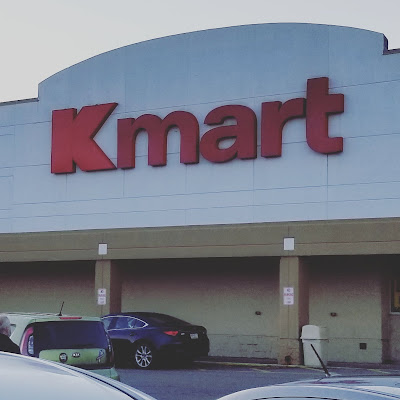 Another last gasp is Kmart.  One of the few remaining Kmarts in the known universe, located in Edwardsville (PA), is closing.  My first trip into a Kmart wasn't really a Kmart...it was a kind of proto-Kmart known as Kresge's in downtown Scranton.  My brothers and I would parade down there with my mother, probably looking like a duck walking with her ducklings, and do the shopping thing.  A high-point was stopping in the cafeteria, where we could get a soda and on the rare occasion a muffin.  Kresge's evolved into Kmart, the staple for us being the one located in the Birney Plaza in Moosic.  Alas, that died a slow death a few years ago, only to be replaced by a pretty nice supermarket.

Anyway, I couldn't forgo the opportunity to make my last stop in one of the last Kmarts in the universe, so my younger stepson and I make the few-mile trek.  It was everything one would expect...this combination of sadness and apathy rolled into an odd mix of horrible-looking clothing and a few Craftsmen tools.  I did end up getting some tools during that trip by the way.  I also saved the bag.  30 years from now maybe I'll pull it out from a drawer and reminisce about how my brother Chris had this habit of pouring some of each different kind of soda into his cup as we were at the small Kresge's cafeteria.  Yes, he was a rebel even back then.

Created By Stephen Albert at 10:11 PM