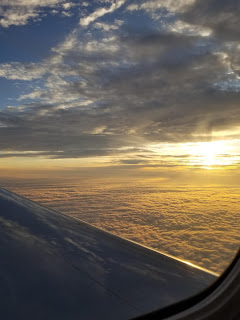 Live from some (not so) out of the way kiosk at Chicago's O'Hare International Airport.  It's already been a long day, with my waking up at 4am-ish for a flight out of Cedar Rapids, Iowa.  The plan is for me to get back to Scranton by around 2:30pm or so.  Then again, based on the last data I've seen, there is a 1 in 5 chance of that arrival time not being true when flying out of this airport.

Anyway, one of the things I've had to personally come to terms with over the past 3 years is post-traumatic stress disorder (PTSD).  I never thought much about this until recently, with my prevailing attitude has been one of "this is what happens to soldiers when they return from the war".  That sentiment is true, I am sure, but I never thought that it would impact me.  However, I can see now that the events surrounding my brother's death have impacted me in just such a way.  Even writing this is difficult in part because I am loathed to admit any kind of mental or emotional failing (other failings are fair game).  I still, all these years later, need to be superman, even though my (figurative) days of rescuing are long gone.

What does the above look like?  How do I feel about it?

A few years prior to my brother's passing we (my brothers and I) were there when our mother died in the hospital.  In fact, I think that it was Chris who was holding her hand when she finally slipped away.  I have no sadness at or for that event, as my mother had suffered enough.  It was, in an odd sort of way, good that she had passed away.  Life was always a difficult endeavor for our mother, oftentimes filled with anger and disappointment, with physical pain and dark memories of the past.  All of that is gone now.

So, why the difference in feelings and reactions between my brother and my mother?  Looking back in as objective a manner as I can, I know they were both in physical pain.  My mother being riddled with the lasting effects of multiple brain tumor surgeries, exceptionally poor vision and arthritis.  My brother with shoulder pain that required a certain degree of sobriety to treat, a degree that he was never able to achieve.  They were both in emotional pain as well.

The odd thing about my brother is the fact that I never felt that part of his emotional pain was dealing with his substance abuse.  In fact, over the last few years of his life, that abuse had become an ingrained part of his life.  It has become a kind of organ unto itself, no longer being external to his existence.  He just seemed to accept this as part of who he was, only making efforts at sobriety at the urging of others.  It was as if he had decided that whatever emotional pain he was feeling needed these substances to be kept at bay.  He never told me this directly, mind you, but I had so many conversations with him where this subtext was so clear that even the dullest among us could clearly see this particular forest from its trees.  In the end, my brother had convinced himself that substance abuse was the only way to live a pain-free life, failing to see that this "cure" was actually the real disease.

Seeing the above, and maybe just as important (sort of) understanding the above is something of both a blessing and a curse.  I have thought and thought and thought about all of this time and time again.  I've used all of the logic I can muster to try and understand that which is inherently illogical.  Yet throughout all of my reflection, I'm not really left feeling that much better about it all.  I haven't "made peace" with my brother's death, but part of what I've learned since January 5, 2017, is that this may never be the case.  What I have come to terms with, thanks to much reflection and help, is that I accept how I feel about all of this; put another way, I've made a kind of separate peace about my feelings relative to those events.  Thinking about my brother can make me decidedly sad, but it's okay to be sad when thinking about losing someone close to you.

The above is an important kind of lesson, especially for me:  Life is a series of opportunities to learn and grow.  Some of the most important lessons though are also some of the most difficult to learn.  One of those difficult lessons for me is that sometimes the things I am good at in life (logic, control, problem-solving) aren't always the things I need in life.  Sometimes logic makes it worse.  Sometimes we simply have no control.  Sometimes we encounter problems that just can't be solved.  And all of this is okay.
Created By Stephen Albert at 10:47 AM