The Cost of Betrayal, NEPA Style

...and asked, "What are you willing to give me if I deliver him over to you?" So they counted out for him thirty pieces of silver.

Dunmore (PA) borough council voted this past week that the Keystone Sanitary Landfill is not a structure for purposes of zoning, and as a result can go forward with a plan to create a real mountain made of (mostly) out of state trash.  You can read more about this HERE.  This will allow the landfill to remain open for more than four decades into the future.

I'll note that I have nothing personally against the family that owns the landfill.  In fact, as supporters of the University of Scranton, they helped fund scholarships that enabled my soon to be Ph.D. middle daughter to earn her B.S. in biology.  What I do have a problem with though is allowing something that will harm the environment of this area of centuries to come.

Taking a step back, Northeastern Pennsylvania (NEPA) was the world's center of anthracite coal mining for almost a century.  The area still bears the environmental scars from this activity, even though most of the regions coal mines were closed by the time I was born in 1964. 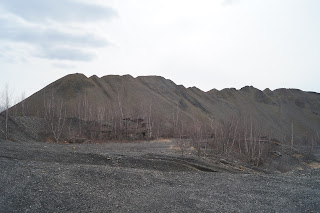 The coal mines made a few people wealthy and left many areas in ruins.  I personally also think that this activity helps contribute to the higher cancer rates in this region(*).  It's against this backdrop that four members of Dunmore borough council voted to allow the landfill expansion.  The key question is this:  Why?  Really, what's the underlying reason in support of the landfill?

While the landfill is a highly engineered structure (by its own admission), the fact remains that no amount of planning will prevent some level of groundwater contamination by the decaying consumer and commercial waste at the site.  What's more, the landfill itself sits upon abandoned deep mines (you can see for yourself HERE), which in this area tend to be filled with water.  The landfill also produces methane gas as the trillions of bacteria treat its contents as a kind of "all you can eat garbage bullet".  Some of this gas is captured and used for energy production, some of it is also burned off.  Some of it inevitably escapes into the atmosphere.

Yes, we need to put our garbage somewhere.  However, in NEPA, we shouldn't have to also deal with the garbage of other states as well.  At this stage, we've done enough in the area of sacrificing for the greater good, again going back to the coal mining days.

In the end, the records will show that four members of Dunmore's borough council decided that some benefit known only to them was far more valuable than the health of an entire region.  For their figurative 30 pieces of silver, they betrayed an entire region.

Created By Stephen Albert at 11:03 AM