If a Tree Fell in the Woods (or if a Relative were Hired in the Scranton School District)...

With apologies for the impossibly long title. 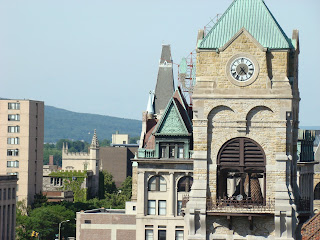 (photo by the author)

During the September 3rd meeting of the Scranton School Board (the Board/SSB), something unusual happened, namely that Director Lesh actually attended.  This has not been a regular occurrence over the course of 2019.  Something else happened that may not be unusual in the history of the Scranton School District (SSD), namely nepotism.  Emphasis on the word "may" by the way; more on that in a moment.

During the above-referenced meeting, the Board hired Ms. Dawn Lesh as a fifth-grade teacher.  Reference HERE.  If you've heard that last name before then congratulations...you have a functioning short-term memory.  Yes, Ms. Lesh has the same last name as Director Lesh, who just happened to show up for a meeting.  To vote for Ms. Lesh, among other business.

Note that the SSD has been a hot-bed of nepotism.  Case in point:  The former business manager, who admitted to one felony as part of an on-going corruption probe (reference HERE), has a spouse working for the SSD.  That's one of many familial relationships in the SSD.

Problem established, is Ms. Lesh related to Director Lesh?  I don't know.  Strangely, the family relationship...or lack of family relationship...was not referenced at all by the Scranton Times.  Not in the report from the meeting.  Not in any reporting since the meeting.  I even contacted two reporters at the Scranton Times to inquire about this omission; one got back to me and said that they wanted to ask Director Lesh about that, but he is rather stealthy when it comes to press accountability.  The second reporter hasn't responded to an email I sent a few days ago.

Why am I even writing about this?  Two reasons:

The above noted, if Ms. Lesh is not related to Director Lesh, then she deserves to be free of the tarnish by association.  Being a teacher is hard enough these days, especially in Scranton and she deserves the public's support (as do all of our teachers).  She also deserves a public affirmation that her hiring was based on talent and ability alone.

If Ms. Lesh is related to Director Lesh...as a daughter, daughter in law, niece (by birth or marriage) or any other familial relationship...then this a new low for a school district known for new lows.  In fact, I would argue that this is the worst insult of all, as the SSB recently voted for a recovery plan that will negatively impact taxpayers for years to come.  Implicit in the recovery plan is the idea that the SSD is changing for the better; blatant nepotism is among the worst of the "old" SSD sins.  This would be a step back for a school district that is already backed up to a cliff of its own making.

By the way, nepotism is always wrong.  In every instance and manifestation.  Giving a relative a job, no matter how well qualified they are, reinforces the idea that public service exists for the personal enrichment of the powerful and well-connected.  It also denies the SSD the talents of individuals who just happen to have the wrong last name.

The taxpayers of Scranton, those who have paid (and will continue to pay for) the for SSD's corruption in the past deserve to know if that corruption is still a thing of the present.

Created By Stephen Albert at 10:35 PM