After The Ball (May 2019 Primary Edition)

Scranton School Board
I am genuinely sorry to see Tom Borthwick not win a seat for the Scranton School Board.  Sorry for the Scranton School District (SSD), to be more precise.  Tom is genuinely a good man, someone I've known for many years, and the energy he brought to the SSD was unlike anything I'd seen from other candidates or board members.  There is good news though in Tom's election results:  He'll be spared the headache and heartache that is coming with a mandatory state takeover of the SSD.  I know that in Tom's mind that is not a foregone conclusion, but it is in mine.

In the end, this just simply means that someone or something else will benefit from Tom's talents.

Scranton City Council
I was thrilled to that Dr. Jessica Rothchild won a seat on Scranton City Council.  I do, however, wish that the Scranton Times spent as much time referencing her significant academic/intellectual qualifications as it did her sexuality.  Don't get me wrong...I'm thrilled that Dr. Rothchild can publically represent a community that has, until fairly recent history, had to be on the margins of acknowledged public life.  I'm not thrilled that she was almost exclusively referenced as "Jessica Rothchild, LGBTQ Activist".  I had more than several mental rants where I was screaming "...but she has a f&%king Ph.D. too!" at the computer screen after reading a Scranton Times article.  Maybe I'm sensitive to that point because I have a daughter on the verge of earning a Ph.D., and I know all too well how challenging it can still be for women in the sciences.

Why is the above such a big deal?  Well consider this:  In fairly recent memory, the SSD had two presidents that didn't even graduate from high school.  This is not an area that has always valued academic achievement, and based on the Scranton Times reporting, well, there may still be some work to be done.

Lackawanna County Commissioners
It looks like the adults will be taking over next January, as incumbent county commissioners Patrick O'Malley and Laureen Cummings we denied a place on the fall primary ballot.  Another great choice (not said sarcastically, by the way) by local voters.  If pandering could get an elected official frequent flyer miles, well then Commissioner O'Malley would have accumulated enough points for a trip to Hawaii, taking the Duggar family along with him.  Round trip.  In the first class.  I'm less questioning Commissioner O'Malley's intentions as I am his habit of serial glad-handing (especially when it came to the issues of property reassessment).

Commissioner Cummings, based on the many conspiracy theories that she actively sells on her public Facebook page alone... 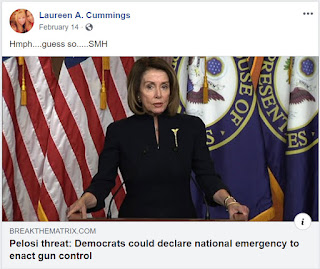 ...doesn't deserve the honor of public service, as it requires respect for all constituents, not just those who happen to agree with you.  In Commissioner Cummings' world, you can't be for any regulation of firearms without wanting to ban all guns; you can't have any differing views about abortion without being labeled a baby killer.  That's a level of toxicity that we can all do without.  Instead, I offer the following philosophy as an alternative, courtesy of musician Vince Gill:


DAN RATHER: "Do you like the way country music is going today?"
VINCE GILL: "I do. It's not my cup of tea, but I don't know if I was Merle Haggard's cup of tea when I first got going. And I don't know if Merle Haggard was Roy Acuff's cup of tea. I don't know if Roy Acuff was Jimmie Rodgers' cup of tea. You know what I'm saying? To me, to be "that" guy that looks back, you sound like a curmudgeon, you sound like you're bitter, you sound like all those things. I love seeing kids come along and being moved by what they're moved by. I don't care that they're not moved by the same things I am. I love seeing young people just out there doing what they love. There's not a rule book that says you have to like this, or it doesn't count or you're not as good. I'm not gonna be that guy. There's a lot of it I'm not crazy about but it's not personal. They don't have anybody cheering for them harder than I do."