Indeed is a drug...Indeed, as in the Indeed job search site.  Once you start receiving the feed in your inbox, well, it indeed becomes something of an addiction.  It makes me wonder if I'll now perpetually be in a job search mode.

I held a baby and put him to sleep...rocking in my arms on Saturday.  As I noted in a somewhat private Facebook posting, there are few things more perfect in all of the world than a sleeping baby.  The experience brought back so many memories when my daughters were infants.  That was, by the way, a long time ago.

Also in the baby department...I received a text message from my youngest daughter telling me that I am going to be a grandfather...as in she got a new puppy.  He's a lively 5-month old that reminds me of Scrappy-Doo.  As I've said many times before, most dogs are, for the most part, better than most people.

Magnesium L-Threonate...is kind of tough to spell and I don't even try to pronounce it.  What I can say with some authority is that, as a supplement, it does that rare kind of thing:  It actually works.  I've been taking it since late December and I do find that it both helps me sleep and seems to give me something of a boost in the cognition department.  You can read more about it HERE.

Second posting...I actually hadn't planned on writing this posting, let alone publishing it.  In fact, I worked on a posting over the past few days that is 99% ready to go.  The trouble with it is two-fold though:  1) It's on a serious topic, and I'm too tired to edit a serious posting 2) I'm convinced that it's either really good or incredibly stupid.  One or the other.

A brief conversation with my sister-in-law...over the weekend centered around this idea that, when I was younger, I figured that by the time I was in my 50's, I'd have the career thing figured out.  Things would be stable.  It's been my experience, and sadly the experience of a few others I know, that not everyone gets that gift.  See the first entry in this posting.

Books...Every so often I feel this compulsion to re-organize the many books I own.  Just such a compulsion has been in effect lately, brought on in part by the fact that I've been bringing home some of the books that I had at work (1-year rule applies:  If you don't reference it in a year, well, you don't need it there).  Anyway, I have four shelves organized, inclusive of these... 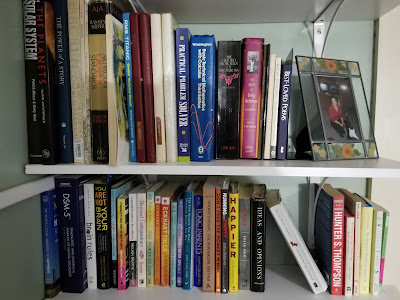 There's much more to do, but so far I'm happy with the results so far.  I also have two stacks of books to either donate or add to a future yard sale.

Corporate welfare and automation...is the underlying thesis of a terrific article I recently read.  You can find it HERE.  There are times when I actually do think our society is on the brink of an awakening of the likes none of us have ever experienced before.