There were only a few things in life that ever actually impressed my late mother.  Stripping out people for a moment (Martha Stewart, for example, could do no wrong...even with the felony conviction), she was impressed by folks who were well educated.  While my Mom never really said so to either of us, I know she was proud of her two sons who earned college degrees. 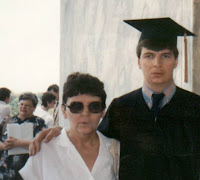 Before she passed away, I had told my Mom that I had been toying around with the idea of going back to school.  Her response was usually something along the gruff lines of "well, what's stopping you?".  In my life up to about eight or so years ago, well, a lot of things were stopping me.  These were things like time, energy, money, etc.  All valid reasons.  About a year after her passing I made the leap.  No more excuses.  It was time to either go back to school or shelve the idea entirely.  I made the former decision, and in September of 2014, I attended my first class in the Villanova University M.S.-HRD degree program*.   For the official record, my anxiety level for that first class was a 12 (on a scale of 1 to 10).

Fast forward through 30 graduate credits, countless tests, a large novel's worth of papers, stacks of research and I completed my actual coursework in May 2017.  Graduation had to wait though until I completed the final program requirement, namely passing an industry examination.  Something I managed to put off for a year.

The above procrastination ended today with my passing of just such an exam.  More on that later, once I get my official results.  I'll note that I put in between 30 and 40 hours, give or take, in actual exam preparation.  I'll also note that the test was one of the most difficult I've ever had to take, and that list includes three securities examinations and one for a Pennsylvania insurance license.  Put another way, if you think "HR stuff" is easy, well, I'll lend you my study materials. 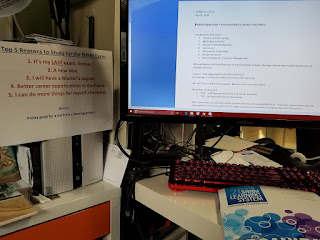 How do I feel about all of this?  At this stage, I'd say numb.  The whole going back to school thing was an enormous undertaking for me, both in terms of cost (even with tuition assistance from my prior employer) and sheer effort.  While I enjoy writing (obviously...), I didn't enjoy the pressures of research work, final exams, etc.  The on-going theme in my head was one of "I'm too damn old for this".  Quite frankly, I'm just glad this is over.  And it is all over, as my academic career has just concluded.  It's time for me to move on.

Moving on is a big part of what's going to happen next.  In life, we all meet points in time when we know things are going to change.  For me, this is one of those times.  A kind of nexus if you will where things converge and then move off into new a direction.  That new direction for me is going to involve more rest, more outdoors, more, well, "fun".

I couldn't have done this, by the way, without a cast of supporting folks who either put up with me, coached me, or, unknowing to them, motivated me in some way or another.  Chief among the members of my posse is my wife, Ms. Rivers, who has spent more time that she should have cleaning up after dinner so that I could get to school work.  She also deserves a medal for all of the incredibly dry papers she has had to read and edit for me over the past few years.  I also need to thank my many co-workers, across two wonderful organizations, who have encouraged me along the way.  They know who they are, but in case they forget, I'll be reaching out.

Finally, while she isn't here to see this, I know my Mom would be proud of me on this day.  As I was thinking about the exam over the past few days, and the fact that it was the last thing I needed to graduate, I knew that she was there with me in spirit.

(*) You can learn more about Villanova's graduate HRD program HERE.

Created By Stephen Albert at 5:51 PM

Email ThisBlogThis!Share to TwitterShare to FacebookShare to Pinterest
Labels: Education, Me, Me (Professional)