In October this blog will be ten years old.  In blog years, well, that's pretty damn old.  So many blogs have come and gone since I started this, far more than I can actually remember.  Anyway, that fact...coupled with a lot of work I'm doing on/for myself...got me to thinking about recently about why I do this thing.  Well, outside of the obvious part about liking to do this thing.

I've always been writing things.  In college, I would write voluminous letters.  When I started with my last employer, I kept something of a journal.  I would, in fact, journal quite a bit over the years.  Much of that stuff still exists in notebooks that are stuck in boxes and corners, awaiting my untimely demise, ready to find some emo-esque enjoyment on the part of my children no doubt.

Prior to the formality of my own URL, I was writing on another social media platform.  Side note:  I really do need to recycle...or at least read...some of that old content.

Growing up, well let's just say that emotional expression wasn't exactly encouraged by my sole engaged parent.  As I've noted here from time to time, I think it was everything my Mother could muster just to keep four boys fed and clothed.  Granted that the Albert boys... 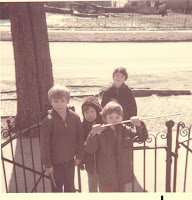 ...could be something of a handful, but more than a half-century and my own parental experiences later, I can say with some certainty that we were actually among the better crop of young men in our respective age brackets.  Recent deep ponderings on my part yield the fact that there was likely more going on with my Mother, which for better or worse, pushed things like encouragement, developing healthy relationships, self-confidence, and managing adversity out of scope for us as life-lessons (at least as taught by my Mother).

Many of these skills I have learned...some the hard way, I will note...later in life, and I am grateful for that fact.  I do, however, think my late brother Chris may have struggled even more than yours truly when it comes to some of these lessons.  Let's hope that there is an afterlife and that he's there now, fully redeemed.

Anyway, I didn't learn how to manage emotions in a healthy manner growing up.  For some, that could equate to a lifetime of, for example, anger management issues, or maybe even self-medication/substance abuse.  For me?  It manifests itself through what I've learned is a kind of intellectualization of emotions.  Basically, I have difficulty understanding and expressing my feelings, so my lifetime coping mechanism has been to try and parse things out into logical chunks that I could more readily understand.  I turn how I am feeling into an exercise in data analysis, mostly because:

1) I am good at analyzing things

2) See above...I never learned about the healthy expression of emotions

I actually have to be careful here, as I could end up being guilty of the same set of actions in this very posting.  Simply put, it's easier for me to deal with emotions intellectually than it is for me to actually feel them.

The above is a workable strategy, to a point.  The wheels came off though with the rapid-fire loss of a job and a brother.  I've learned that there is no amount of logic could help me through the heartache of losing my brother.  In tandem, the anger I felt at the way in which I lost my last job defied a logical, intellectual understanding (see THIS posting).  I've actually felt guilty over feeling angry in that case.  In totality though, my ability to simply intellectualize my feelings was overwhelmed by the dual loss of a job and a sibling.  Rightfully so, I will add.


Now the rainman gave me two cures
Then he said, “Jump right in”
The one was Texas medicine
The other was just railroad gin
An’ like a fool I mixed them
An’ it strangled up my mind
An’ now people just get uglier
An’ I have no sense of time

For me, there is no Texas medicine (or railroad gin) that would actually help, which is actually a pretty good thing.  No, what happened to me has forced a kind of re-assessment of how I experience parts of the world...mostly the part of the world that sits inside my own head.  While I am grateful for the opportunity that my losses have given me for reflection and growth, part of me is a bit saddened at the revelnation/prospect of just how much I missed growing up.  Reflection will do that sometimes.  Now no parent is perfect, me especially, but I hope was able to provide more encouragement...more permission to feel...to my children than what I was given.  Hopefully, I've broken a cycle before it could continue.


The song lyrics, by the way, are from Bob Dylan's "Stuck Inside of Mobile with the Memphis Blues Again".  Highly recommended.

So where to from here?  Why even write this?

Well, I feel a bit unsure about posting this, but that hasn't stopped me before.  Besides, I do feel a kind of need to now "get on" with some things in my life, and I do think this is a part of the process.  What kind of chronology of my life would this be if it didn't include revelations of both the small and the big?

In the end, I still can't give a complete voice to how I feel over Chris' death, but I do feel more at peace with having those feelings.  What's more, I have an understanding why the process of expressing those emotions has been so very difficult for me over this past year.

I'll call the above a win, all be it a hard-fought one.

Created By Stephen Albert at 9:58 PM

Email ThisBlogThis!Share to TwitterShare to FacebookShare to Pinterest
Labels: Blogs/Internet, Me, Me. Deep Thoughts, Planned Parenthood