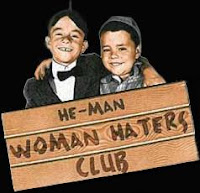 ...(also known as the Friendly Sons of St. Patrick) will hold it's annual (men only) banquet this Saturday, March 17th.

The fact that most of the men (only) in the room are Democrats adds just a dash of irony to the whole event.  If this were predominantly Republican event would there be moral outrage coming from all corners of NEPA?  Call me crazy, but I'm thinking that the answer is a resounding yes.

Now does the organization in question do good work?  I am sure that's the case.

Am I committing NEPA career suicide by event writing this post?  Maybe.

However, I do think this event speaks volumes about Northeastern Pennsylvania, particularly from the perspective of patriarchy, the over-sized influence of religion in the area, and a general resistance to change among local power brokers.

I'll be waiting with bated breath for the glowing coverage of the event that no doubt be found in the Sunday edition of The Scranton Times.  Who knows?  Maybe that same edition will feature an outstanding editorial on the importance of having more women run for elected office in NEPA.

Note:  It's not just me; read a similar opinion in today's edition of the Wilkes-Barre Times Leader.


Created By Stephen Albert at 9:17 PM