I had to be somewhat prodded into pet ownership in November of 2010.  I was (newly) living in an apartment by myself, and in retrospect, coming home to a completely empty place wasn't very healthy for me.  My oldest daughter Katrina had a friend who had two kittens that needed to be adopted, so, as she is skilled at doing, she convinced me to act in spite of myself.

The actual kitten selection process was to take place in a parking lot somewhere that I now forget.  On the drive over, Katrina and I pondered the various possible names for a new cat.  I really wanted to name the cat "Bill" as in "Bill the Cat"... 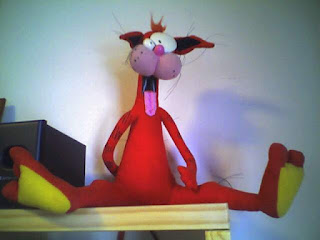 ...but Katrina assured me that this was a bad idea.  We pondered other names, eventually falling into several that mostly centered around Star Trek characters.  Why?  I have no clue.  The two finalist names were "Spock" and "JeanLuc".  I settled on the latter.

The actual meeting was quick.  Katrina's friend brought out a small carrier with two identical cats...brother and sister...who needed to be adopted.  Not being very confident in my ability to take care of one cat, let alone two, I passed on the opportunity to cat-parent twins.  Of the two kittens, I picked the one in the back, who turned out to be a boy.  He seemed to need me. That also helped make the whole JeanLuc thing work.  That day was November 27, 2010. 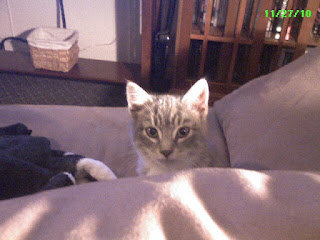 This was one of the smarter decisions I've made in my life.  Up until then, I hadn't realized how utterly horrible it was coming home to nothing.  Going through a separation and divorce, I went from a loud house to an eerily quiet apartment.  Starting on November 27, 2010, I had someone to come home to.  Yes, every workday JeanLuc would see me off in morning and be waiting at the front door...like a dog...when I came home.  He was someone who, on the surface, needed me...but in reality, it was me who needed him.

These days, JeanLuc is a little heavier (well, in fairness, so am I) and a bit less active (that makes two of us), but he still often meets me at the front door. 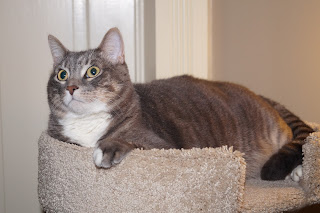 Like me, his (kitty) family has expanded, with the addition of step-brothers Tiger and Rambo.  Life now if a bit less dramatic and more predictable for both of us.  Here's to many more years together.

Created By Stephen Albert at 10:30 PM