I find this whole issue of naming the Harrison Avenue Bridge replacement to be equal parts fascinating and disturbing.


Here's an analogy for you: 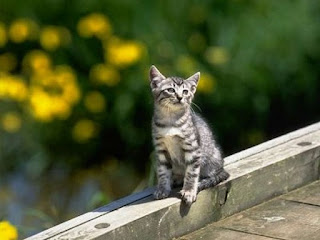 (Photo from THIS site)

You are coming home from getting a new kitten at the local shelter.

Your car gets struck from behind by someone driving a truck.

The truck driver comes out to see if you're okay and notices the kitten.  He asks, "what's the kitten's name?".

You stand there, wondering why no one seems to care about you or car that was carrying you (and the kitten).

The City of Scranton is functionally bankrupt, meaning that its liabilities far, far exceed that of its assets.  It can't substantially raise taxes anymore (see below), and its leaders lack the political will to demonstrably reduce the costs of providing city services.  Even with the infusion of tens of millions of dollars from the sale of the city's last remaining major asset, municipal pensions will STILL be substantially underfunded, and at best all the city can do is to plan on making the required on-going* contributions.

To this backdrop we see local leaders engaged in a heated discussion about naming a bridge.

Call me crazy, call me insane, call me anything but late for supper, but Scranton is in crisis.  All of its leaders (city council, mayor, state representatives, etc.) need to be focused on creating a fiscal plan that brings solvency without increasing taxes on...

Businesses - Scranton's business taxes are punitive and include, among other things, the taxation of gross receipts, so even a money-losing enterprise must still pay into the city.

Yes, it's that bad.  But that's okay, as there's been a robust discussion about naming a bridge.

File this one under Bread and Circuses, Scranton style.


(*) From what I gather, the city will be making current contributions, but will not be doing anything...other than dumping proceeds from the sewer system sale...to increase the pension funding percentages.  Put another way, while sewer system sale will infuse cash into retirement investments, it comes far short of funding the pensions at 100%.  Reference HERE.  If this doesn't scare Scranton residents, well then nothing will.

Created By Stephen Albert at 7:42 PM