I've had some free time of late, and one of the things I've been doing is going through old records that I inherited from my Mom (who passed away in 2013).  My Mom had this period, apparently, when she was very active in the Scranton Boys (now Boys and Girls) Club.  This was probably in part because her four sons all needed something constructive to do with their time and boundless energy, so why not go there?

Anyway, I found a half dozen or so newspaper clippings from that period, including one where she was actually smiling. 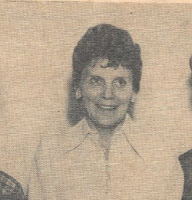 This particular clipping is from January 29, 1973.

I honestly don't have many photographs of my mother with an actual smile on her face, making this somewhat rare.

I won't get into the deep pseudo-psychology of why my Mom rarely seemed to smile, other than to say she had something of a tough life.  I'll confess to not being much of a smiley person myself, although that's not for lack of happiness or joy, but instead, more about a face that seems to look, well, stupidly fake when I smile.  If anything, I seem to have a face built for accountancy, or maybe financial services human resources.

Created By Stephen Albert at 4:45 PM