I know a few folks who get themselves into a bluster over the phrase "Happy Holidays".  Words like...


"Jesus is the reason for the season!"

...get thrown around like excuses at the end of just about every Boston Red Sox season.

Why on Earth would anyone want to offend someone else ordinarily, let alone during a supposed time of joy?  We don't wear signs on our foreheads that say "I'm Jewish" or "I'm an Atheist" or "I'm a Christian", so how would we know what holiday someone celebrates towards the end of December anyway?

I'm perfectly fine saying either "Merry Christmas" or "Happy Holidays", and you can say either to me and I will not mind in the least.  In fact, either will make me happy.

Oh, and there is no "War on Christmas", but rather there is a "War for Ratings" by certain television commentators who simply want to create some holiday hate during what should be a season of hope.  Yes, the fictitious "War on Christmas" is really just a "War for Money" in the form of higher ratings.  Call my cynical, but you can also call me honest.  This is simply the wrong season to be engaging in social issue wedge politics.

There was a great chart that I saw on-line that sums this up nicely.  Credit to Rachel Held Evans for putting this together. 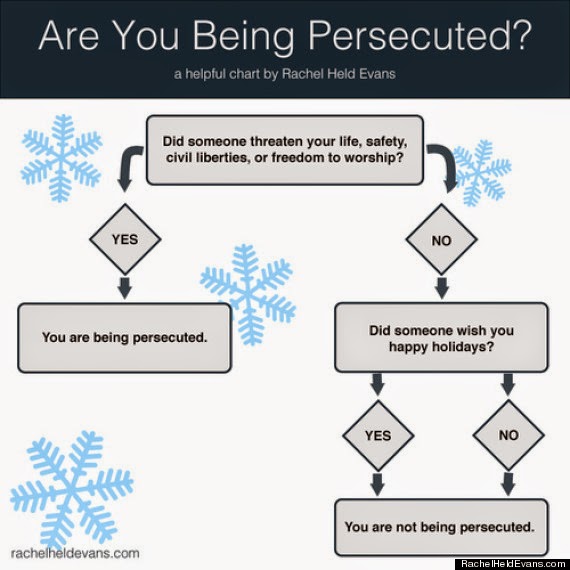 So the end this on a happier note, here's a favorite Christmas song of mine.  Enjoy!

Created By Stephen Albert at 7:22 AM

Email ThisBlogThis!Share to TwitterShare to FacebookShare to Pinterest
Labels: Me. Deep Thoughts, Politics