(Published) Post 1300...For the record, this is published posting 1300 of this blog.  At the moment I have 19 unpublished postings, most of which will probably never see the light of day.  I also have three off-line postings that may eventually be published.  It's all more or less trivia, but I do have some degree of pride in sticking with this blog for so long.  I've said...repeatedly...that I do this for my own enjoyment.  I would, however, be very dishonest if I didn't state for the record that I am honored when people take time out of their lives to read what I've written.  Thank you.

Hillary Clinton...Here's to hoping that the former First Lady, Senator, and Secretary of State decides to retire.  Now for the record I consider myself to be a fan of Ms Clinton, but there comes a time in your life when you should be able to retire.  For this person I think now is the time.  Run for President?  I like the idea, but I think she has earned a rest.

Disingenuous...is the word to describe the conversion of many in the Republicans ranks when it comes immigration policy.  Some, such as Senator John McCain, have at least been quasi-consistent (being for reform before he ran for President in 2008 but then backing off during the election); others have been remarkably consistent, reasonable and logical (such as former President George W. Bush, who bucked his own party by insisting on a path to citizenship).  Most though have been simply sucking up to modern day equivalent of the "No Nothings".

Music...I have been listening to a lot more Roxy Music lately.  Here's a sample.  "Laissez-faire Le Strand".  My older brother Rich was into this back in the 80's, and at the time I didn't understand the attraction.  Now I do, especially given what passes for popular music these days.

Tom Corbett...The Scranton Times reported last week that Tom Corbett is now officially less popular than Adolf Hitler in the Commonwealth of Pennsylvania.  That's not the sad part though...what's truly sad is the fact that he will most likely win re-election.  Welcome to Pennsylvania, where 8 year election cycles mean more than just about anything else.

Audio Upgrade...In the "contemplated upgrade" department, I am considering replacing my Pioneer stereo receiver (that is a few years old) with something new from Sony.  The receiver is great...outstanding sound...but my main beef is that I'd like something that I can port an mp3 player into, as now so much of my music isn't contained on CD's but exists as files.  The Pioneer simply doesn't have a line-in for audio files, although I could probably make it work by using some other input, but I think I'm better off with something designed for digital audio.  Besides, ideally I'd eventually like to combine my "jumbotron" flat screen TV with my audio system.  We shall see.  **Update** In between writing the draft of this post and now I actually did buy a new receiver.  It has more bells and whistles than [insert offensive ethnic reference here].   The actual machine I purchased is a Sony STR-DH720.  Here is to much connecting and figuring to do.

Liz Randol...Look for more postings on the candidacy of Liz Randol, who is running for Mayor of Scranton. Policy aside, Ms Randol, if elected, would represent a cultural breakthrough for the area.  Understand that no woman has been the Mayor of any larger city in NEPA.  In fact, out of the last 4 Mayors of Scranton, 3 were...
...white
...male
...middle-aged
...Catholic
...of Irish decent
(this would be Mayors Doherty, Connors, McNulty).
A woman?  Some who is not religious?  Game-changer on the cultural front.  It remains to be seen if anyone can actually fix the mess that is Scranton's finances, so my view is that Ms Randol probably can't make it any worse.  Hell, maybe she will actually fix something.  In any event, look for more postings here about her candidacy.

Apple Fake News...Courtesy of The Onion... 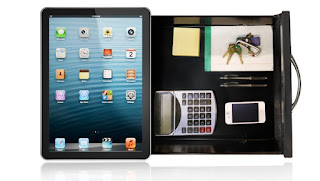 (credit to The Onion...see link, above)

In other (fake) Apple news, the company recently announced that they will be suing 27 different drawer manufacturers for patent infringement.

Apple Real News...Just in case you though the above was really silly, here's something even sillier (but sadly real)...Apple Patents Store Design.  Crazy People + Lawyers = Bad Combination.

Violating The Code...I discovered that some of my original material was used, without permission or credit, by a local message board.  In fact, it was passed off as having been created by someone posting under a pseudonym.  Needless to say I am not happy.  I've written to the administrator of the board in question, but almost a week later I have yet to receive a response.  A "second request" will be sent shortly.  From there?  I'm not sure.  Maybe I'll pose the question to some of my peers in the NEPA Bloggers group.  The fact that people do this...namely STEALING CONTENT...is the height of low rent stupidity.  Yes I am glad people read the blog (see the first item in this post), but all I ask is that I get the credit...or the blame...for what I produce.  I make no money off of this blog, so the issue of content theft isn't one of economics, rather it's one of simple, basic fairness.
Created By Stephen Albert at 8:06 PM

Dave Wenzel was after McNulty and before Connors.

Note that my intent wasn't to list the Mayors in order...rather, it was to show that three of the last for were demographically identical: all were white, middle-aged, male and of Irish decent.