I'm off to my employer's Hartford, Connecticut office later today for a days worth of meetings and interviews tomorrow.  The meetings I have scheduled are mainly just either in support of my main reason for being in Hartford (more in a second on that) or are because I will simply happen to be where others are located.  Either way it promises to be a long day.

By way of disclosure I do go my company's other primary locations with some regularity, with Hartford being the most common destination.  Some, such Ms Rivers, loathe the 3.5 hour drive.  As for me, well I like to think of it as 3+ hours of time where I can think and process stuff.  It's really a gift when you think about it, at least if you are pre-disposed to wanting to think about stuff for 3+ hours.  One of these days I'm going to take the initiative, start something like Rosetta Stone, and learn Italian.  At a minimum I should least find some way to get mileage points for all the car rental time I incur during these trips.

As for my primary reason for travel, I have a staff opening in the Hartford office that I am trying like there is no tomorrow to fill before the end of the year.  The position requires a fair amount of technical expertise, so I am hoping that the selection process is, as a result, somewhat easier. "Easier" by the way is a relative term, as spending the equivalent of several working days either preparing for or conducting interviews isn't exactly "easy", although in fairness it is a hell of a lot better than some of the other things I've done to earn a living in my lifetime.  Maybe, just maybe, the reward if you will for working one's ass off is that you get to call something like interviewing "working one's ass off".

The only wrinkle to this all, as least as far as travel is concerned, is that the weather may be somewhat less than ideal.  So be it.  This is the northeast and it is December, so you will have such things.  Oh, and JLA... 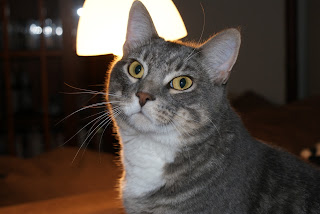 ...is always less than thrilled when I travel, but somehow he always forgives me when I return.  I think that has something to do with guilt-induced cat treats on my part.

In any event, it's onward and outward.
Created By Stephen Albert at 7:52 AM

Email ThisBlogThis!Share to TwitterShare to FacebookShare to Pinterest
Labels: C-S, Cats, Me, Me (Professional)