This was something that Ms. Rivers and I collaborated on recently.  You can also link to the original posting HERE.

Update - Notes for After Our Passing

It has not been quick or easy to make our final arrangements, but we are trying to get it done to minimize what you and the girls will need to do.  For a couple years, we periodically visited cemeteries (per the original post in 2019, we have specific criteria).  I like walking around cemeteries, probably because I grew up immediately next to one.  We ended up choosing the West Pittston Cemetery, which works since it has many trees, small animals, a view of the mountains and as a bonus for me is near the Susquehanna River.  (Although it was annoying that a lovely tree quite near our plot was cut down shortly after we bought it.)

Then it took a over a year to get a monument, probably because we wanted unique stuff.  We started at a Dupont monument business, since the Carroll headstone at the Wyoming Cemetery was purchased there.  After picking marble and sending pictures of a mourning dove (happy first sign of spring, for me) and an entwined eternity and heart symbol, there was no further response to our inquiries.  The problem may have been that we wanted special, multi-colored marble from India, and during early phase of COVID-19 it wasn't feasible to get it.  So we started again with Pesavento Monuments in Scranton, and this time decided to get locally-sourced marble.  Eventually after months of follow-up emails/calls, the design was set, order finalized and grave stone was placed in July.  Here is the result, which we are pleased with: 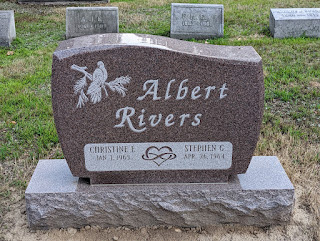 Now we go "visit ourselves" every so often during walks in the cemetery.  However, we are not done yet - still have to arrange more stuff with Metcalfe-Shaver-Kopcza funeral home.

As more practical information, we each created a Death Box which is supposed to have useful information to help with estate work.  So far, mine includes account/website passwords, and a few letters.  We did minor embellishing to decorate the boxes - but the letters are not sticking well.  Steve's is supposed to say "Steve's last waltz", and mine is supposed to say "See ya on the far side banks of Jordan" (pretty much, that's a song - I suggest listening to the Carter Family version).  Here's what they look like, with sleepy Oren & Rambo nearby. 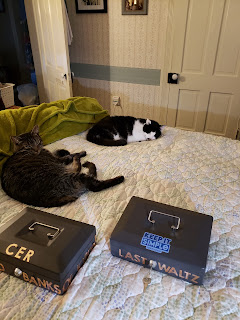 In other news, Theresa Caputo, the Long Island medium continues to post videos on YouTube.  I'm still watching those, and also found Allison DuBois (a medium who has worked with law enforcement) who even more compelling.  Fascinating stuff!  So maybe there is an afterlife!!

Ms. Rivers asked if I wanted to contribute to this posting, and while I mostly don't take writing topic requests, I'll make an exception in this case.

First and foremost, I just don't know.  As in I don't understand the whole "hereafter" stuff.  In some ways, I suspect that is at least partially a case of avoidance, as in I don't want to think about death and what happens next...if anything...so I'm basically just going to ignore it.  That, however, flies in the face of my desire to live a more or less ordered life.  There is also a very practical reason why, as noted by Ms. Rivers, we're doing this work:  We don't want others burdened with it when our mortal coils expire.  I've seen too many examples of people passing and leaving a whole heaping serving of work for others to figure out.  In my book that's just plain wrong.

Second, and to repeat, I just don't know.  Now I admire those with faith in a life after this, including Ms. Rivers, who insists that there will be many concerts...and cats...in Heaven.  Mind you I have tried to (intellectually) understand this, but there is a gaping flaw in my approach to this overall topic.  That flaw, however, is that faith, by its very definition, is having a belief precisely when there is a lack of evidence.  It does not play well with my attempt to intellectualize the hereafter and is therefore basically doomed to fail.  The thing that I've relied on all my life...my ability to process the world through logic and reasoning...is also the thing that stifles me.  At some point, I'm hoping that changes.

Third, while I don't know about some things, I do know that it makes sense to have a final resting place in death that somehow exemplifies the kind of life I've tried to live.  As noted by Ms. Rivers, trees are important.  I like trees.  I also love the idea that squirrels and rabbits will be doing their small animal things on top of our remains.  There's something simple and wonderful about life continuing at the very same place where life has been marked to an end.

Finally, yes, I am quite tardy with creating content for the poorly named "Death Box".   See the first point, as I suspect that part of this is all about avoidance.  I am, however, reminded of what John Lennon noted in a song...

"Life is what happens when you're busy making other plans"

...so, the balance is to continually work on having a good life while also planning on what happens when there is no life to be had.  I'll get there, eventually.

Created By Stephen Albert at 10:33 PM