I recently bought a small, 20-volt battery-operated leaf blower to compliment the massive gas-powered Toro model I usually use for stuff around the property.  I also have a gas-powered Husqvarna leaf vac that only gets used about once a year, as I end up looking like a coal miner by the time I've finished using it (i.e., it spits out a lot of dust).  Anyway, with that gear in mind, Ms. Rivers commented that, with the new leaf blower, I will have less time to spend outside picking up leaves using a bucket and the greatest tool I own...a $3.00 plastic pick-up tool from Harbor Freight (link HERE).

This last piece of leaf pick-up technology is shown below. 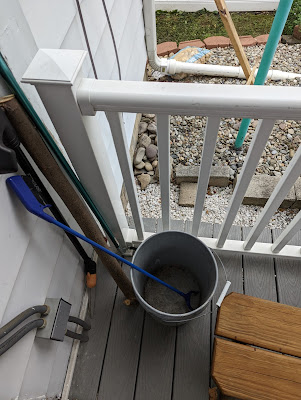 Picking up leaves (and other yard thingies) using this combination of gear is, quite frankly, exceedingly inefficient.  In fact, it is ridiculously inefficient.  There is an almost "Fool On The Hill"-esque  quality to the activity.

Well on the way, head in a cloud
The man of a thousand voices
Talking perfectly loud
But nobody ever hears him
Or the sound he appears to make
And he never seems to notice
But the fool on the hill
Sees the sun going down
And the eyes in his head
See the world spinning round

This is pretty much an activity I engage in most days, March through November, so if you are ever in West Pittston, Pennsylvania just driving around one evening, you're likely to see this ungainly guy (me) wandering around with a bucket and a blue stick-like thing.

Simply put, this really isn't about picking up leaves, sticks, or other yard detritus.  The actual end-product of the buckets-full-o-plant matter is only a by-product of a sort.  This is about me having a seeming excuse to 1) Be outside on a nice day, and 2) Be alone with my thoughts.  I feel, in an odd sort of way, at peace when I am picking up stuff.  It feels as if I have some measure of control over my world, even if that world is confined to just a yard in Northeastern Pennsylvania.  And for the record, the worse the day I have, the more I look forward to picking up yard stuff, one bit at a time.

My bucket detail work isn't just a bad-day kind of thing.  Good days warrant it as well.  In fact pretty much any day when it's not raining (or snowing) and about 45+ degrees fahrenheit outside is fair game.

I do have a more upgraded metal pick-up tool, but it's just as much fun to use the $3.00 model.  The only downside to the $3.00 model is that it has a limited shelf life, meeting its eventual demise via cracked plastic parts.  I always have a few spare ones on hand, by the way, for just such situations.  Over the year it has not been uncommon for me to buy 3 or 4 of them at a time, just to keep a supply on hand.  They are also quite handy for picking up the odd thing that falls behind the dryer every once in a while.

They say you can't really buy happiness, which is probably true.  But for $3.00 I can buy some measure of contentment though, which seems like a really good deal.

Created By Stephen Albert at 10:52 PM