I have this posting about Harpers Ferry, West Virginia, in my head, but then I saw this on an actual Facebook page. 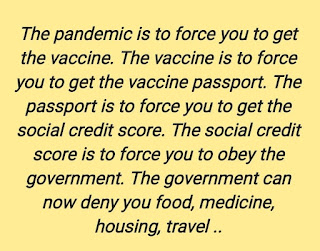 Like roadkill or other unsightly things, I just had to stop and look at this for a few moments.  By the way, this is, I absolutely assure you, a real sentiment expressed on two different Facebook pages.  In other words, there are people who believe this to be true.  And it is horrifying.
I'm not going to refute this, mostly for the same reason that I don't feel the need to refute accusations that gravity is fake, the Earth is flat, and/or that we are all just living in the matrix.  No humor was attempted or intended in that last statement by the way because there is nothing funny about these kinds of anti-vaccine sentiments.  Whether it comes from a Russian social media troll farm or the imagination of some grossly ignorant conspiracy theorist, the net result is the same:  This kind of thing can get people killed.
There is, of course, a larger story here.  A story about how, as a nation, we've made it okay to be stupid.  We've created an environment where 5 sentences of completely made-up nonsense is somehow the equal of the hard work put in by scientists and medical professionals around the world.  In our desire to make everyone feel good, I fear, we've somehow managed to convince a subset of the population that they are as smart as the entire Centers for Disease Control and Prevention.  When you think about it though, all of us...even the people that believe the nonsense spewed in the above 5 sentences...have to rely on other experts.  Do these same people decry the supposed "experts" who change their brake pads?
Yes, we all need to exercise critical thinking skills, so I'm not suggesting that we believe everything we see, hear and read.  But a part of critical thinking is the acknowledgment that a "fact" is only as valid as evidence provided in support.  Critical thinking also requires work, which I suspect is the real problem here...for some, it's simply easier to believe nonsense.  It must also make some folks feel special that they now know about the "vaccine conspiracy".  In essence, this becomes a kind of mental cotton candy:  Nominally food, but having no real substance or value.
Created By Stephen Albert at 10:13 PM