Of Cats and Cars

It’s pretty much an established fact at this point that I’m only writing this stuff once a month.  Not that I want to make this a posting about postings, which bores even me to tears.

Anyway, summer is in full swing, as is life in general.  As I write this, we have a new addition to the family, the former Gaston (now re-named Oren).

I hadn’t planned on getting a new cat after JeanLuc passed away, but Ms. Rivers and Robby wanted to, and questions about “getting a cat” are, for me, about as easy as “hey, want to go for ice cream?” to answer.  A few things about Oren:

While I still do miss JeanLuc, it is nice to have a new cat in the house.  His housemate, Rambo, has been very patient with him, for the record.

Another addition will be arriving tomorrow, in the form of another car.  With my younger stepson getting ready for the quasi-adulting world after high school, I have gifted him my 2008 Nissan Altima.  As I told Ms. Rivers, I think having a car post-high school is important.  It speaks to the freedom to go places and the need to act responsibly when getting there.  It also teaches an important lesson about how things in the real world (such as the freedom to drive places) always come with some costs (be it gasoline, insurance, etc.).  I’ve had the Altima since 2017, and outside of assorted occasional leaks and wear/tear items, such as tires, it has served us well.  Given its age, the mileage isn’t too bad (less than 100k), and it is very well equipped.  I hope Robby continues to enjoy it as much as I have over the years.

By way of additional background, I bought a brand-new Chevy Silverado back in 2016, which I thoroughly enjoy driving.  It’s not very good on gas though, hence the need for the Altima back in2017.  There’s also the fact that I pretty much want to keep the Silverado forever, so driving it less than more is a goal.  Anyway, since I will be working in an office with some regularity for the foreseeable future, it makes sense (in other words, I’ve created a justification that probably only exists in my head) for me to look for another vehicle.  That process has been ongoing but concluding tomorrow when I become the owner of a 2018 Toyota C-HR.  As they say in the television news business (or used to say…) “film at 11”.

Now me being me, I literally analyzed the crap out of the car selection process, including the creation of a car analysis spreadsheet in Excel.  I had criteria and data, but as is the case with buying a vehicle for me, there is also a kind of “X factor/gut instinct” thing going on.  In this case, while the C-HR was on my potential list (good gas mileage, a hatchback, not AWD…which I don’t need because of the Silverado…etc.), what sold me was the fact that it just doesn’t look ordinary.  Not that I am all that interested in calling attention to myself, driving or otherwise, but all of us spend a fair amount of time in our vehicles, so why not at least have that reflective of something that looks good? 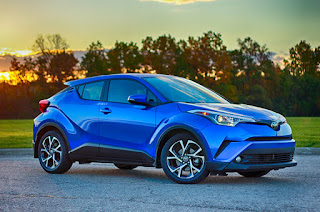 This is, for the record, probably the worst environment ever for buying a car (or a house for that matter).  Never being one for good timing, it is more important to get this purchase over with now than put it off any further.  The alternative is my continuing to ruminate over this even more.  Given the choice between probably overpaying or needlessly renting out space in my head, well, I chose the former.

On that note, the yard beckons and grass must be cut.

Created By Stephen Albert at 11:04 AM