Decades from now, if I'm still around, I'll be reading the history books about the horror that was the year 2020.  Of course, there was (well, now, "is") the pandemic.  Then we had a president who believed in American democracy...but only to the extent that it allowed him to do whatever he wanted.  Then we have murder hornets.  The passing of an iconic Supreme Court justice (the Notorious RBG).  And countless other things. 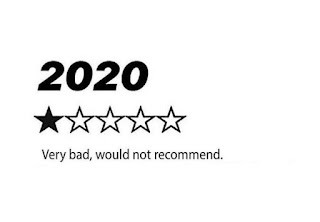 What will stick out the most for me?

Well, before I answer that, I want to note that I'm not minimizing the tragedy of COVID-19.  We are, at the moment, nowhere near the end of this, so I'm sure there will be grim entries yet to come.  But yet, while I've known people who got sick (and a former boss who died from it), some of the collateral that goes with it hasn't been too terrible for me.  Saving a trip to a restaurant isn't the worst thing that could ever happen to me.  In fact, if people didn't get sick and die...if all we had to do was deal with social distancing, wear masks, wash hands, and staying home more often...well, I think it would be fine with me.  I know, that may sound terrible, but as I often say, it has the benefit of being true.

Anyway, the worst part of 2020 for me was the 6 months I spent between employers.  As I noted (probably too often) before, when you work for an employer for nearly 28 years, and then find yourself in the job market, well, it becomes something of a small trauma.  Except for the fact that I have worked for four different employers since that 28-year stint.  In three of the four cases, well, my hope was that it would be my final career stop.  That was not to be.  Well, I am hopeful for one of those stops (see below).  You see, I just wasn't equipped for the whole four employers in four years thing.  I wasn't intellectually equipped, and I wasn't emotionally equipped.  It's just not me.

Like most things in life though, it is the hard times that become something of a down-payment for the good times in our lives.  It's the bad times that help us better understand ourselves and appreciate the good times.  It's every blues song ever written.  It is all the grand cycle of life.

The above seems to be true for me, at least in the case of all I have experienced, sans one* glaring example.

Getting back to the dumpster fire that is 2020, my 6 months in the trenches of a job search laid bare some of the worst that pings around in my head.  It would do that to anyone.  I'm connected to a few folks on LinkedIn who are still battling a job search, for longer than my 6 months, and I'm shocked that some of them still manage to get up every day and keep trying.  Yet they do.  I will gladly say that many of these folks are better than I am, in more than a way or two.  Count me among the fortunate.

Speaking of fortune, sometimes it comes at your sideways, where you least expect it.  So it was for me, with more than 6 dozen employment prospects having not worked out, I ended up seeing an Indeed.com posting that I almost ignored.  It wasn't the kind of organization I had any experience with, which left me with thoughts of "they would never be interested in me".  Yet for some reason, I thought to myself "what the heck...I'll apply".  I expected even less from that application than I did from just about anything else I sought interest in during those 6 months.

Oddly enough, it worked.  It really worked.  An unexpected phone call and two formal interviews later and I type this a fully employed human person.  For more than 60 days now.  It sounds like a cliche, but there are times when I just want to pinch myself, as it doesn't seem quite real.  I feel a mix of good fortune and cautious optimism (the latter of which is far harder for me to process than it probably is for others, as I have been told I am wired for "when it's good it's bad").

All of this reminds me of the fact that life isn't a freeway, but instead, it's sometimes like the worst turning circle on Earth.  I'm going to be thinking about these experiences for a very long time to come.  That's the worst-case by the way.  The best case?  Well, maybe I'll just be happy.

(*) My one glaring example:  I doubt I will ever see the good side of losing my brother.  He should still be here, and I can say with 1000% honesty that I truly miss him.

Email ThisBlogThis!Share to TwitterShare to FacebookShare to Pinterest
Labels: 2020, Me (Professional), Me. Deep Thoughts