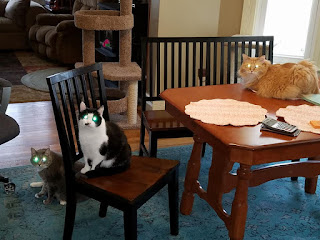 Admittedly, I work hard at maintaining my composure, and for the most part, I am successful.  Every once in the while though I get close to losing "my stuff".  Such was the case today coming home from work today, as I talked to my wife about this story in the news:

This story has bothered me since it first appeared in the news a while ago.  The latest iteration is hopefully the last time it rears its ugly head.

I will not describe the story, other than to say that the story title is literally true.

Now it's not much of a secret that I love cats.  In fact, I've written 29 (now 30) postings that reference cats and those are the ones that I actually remembered to correctly tag.  Nothing against dogs, which I do like also, but I have a big soft spot for cats.  As a fully functional big adult person, I have that right.

Anyway, here's the larger point: I work hard...very hard...at believing people are inherently good.  Even when bad actors appear, I want to believe that they are trying to do the right thing, even if their actions contradict that idea.  Maybe they are simply confused.  Then I read something like this, and, I just don't understand.

Our pets (cats and dogs) don't have malice.  Even in the worst of circumstances, their actions are a product of instinct.  If someone is attacked by a dog, for example, the dog is doing so because it feels threatened (or feels that their owner is being threatened).  There's an almost comforting purity to that notion, even when polluted by those who would train the dog to act inappropriately.

To this story, I simply can't process how this "person" could harm a helpless cat.  It genuinely pains me to even think about it.  How does this person's thought even work?  How dark...how disordered...does a thought process have to be in order to come up with this kind of action?  I don't understand.  Part of me wants to understand, but another part of me is incredibly angry at what this "person" has done.  Unlike this "person" though, I have the ability to exercise some control over my errant thoughts.

In this story, the animal wasn't the cat.

Created By Stephen Albert at 9:49 PM