Children of the Corn

"He who walks behind the rows" 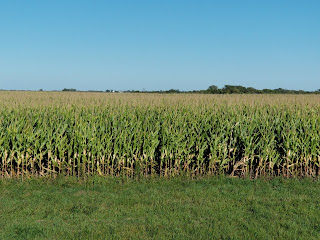 My late brother Chris and I would sometimes randomly quote movies we liked, including the above references to Stephen King's Children of the Corn.  Another favorite movie to quote was Stanley Kubrick's A Clockwork Orange (a truly disturbing movie, for the record, which explains why we liked it so much when we were in our early teens).  Anyway, I was thinking of the "He who walks behind the rows" line as I was in Iowa, driving to Cedar Rapid from Fairfield.  The thought was so motivating that I actually stopped to take a few cellphone pictures. 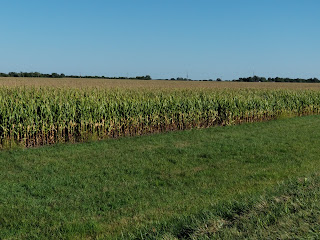 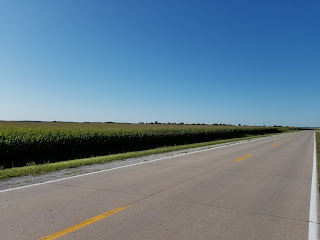 This was something of an Iowa homecoming for me, as I had traveled to the state quite a bit during the years 2004 through 2014.  Iowa is, in some respects, the anti-matter New Jersey:  Not crowded, wide-open spaces, exceptionally friendly people and a big sky.  By "big sky" I mean this idea of a sky that is a kind of big dome over your head, circling around to the horizon in all directions.  When you live in a place with tall hills/mountains, it just seems like the sky just isn't quite so big.

Oh, and there is the air.

The air here feels different.  Mind you, that notion of different has a certain range of motion, in the sense that, for example, as I was driving by a General Mills facility there was a kind of funk the air, a sweeter version of what I experienced while driving by the manure facility on Tuesday evening in route to Ottumwa.  Outside of those human-induced invisible clouds of funk, the air in Iowa just feels better.  That's something I would never have noticed, say, ten years ago.  However, having developed asthma somewhere during the last decade or so, I've become acutely aware of how clean the air around me is, and how that might impact me.  The impact, by the way, isn't all that much, especially given things like rescue inhalers, but it's an annoyance...and source of future health pondering...never the less.

Iowa would be a perfect place for me if it was next to the ocean.  It's worth noting though that there are no perfect places.  What's more, future moving decisions will be driven more so by proximity to children than air quality.  What I will say is this:  Had I been born in Iowa I would likely never leave.

The trip, by way, was a good one.  I met lots of great people with my (still relatively new) employer and I have an open invitation to come back any time I am needed.  It's a good feeling to know that what you are doing is valued.

Created By Stephen Albert at 11:40 AM

Email ThisBlogThis!Share to TwitterShare to FacebookShare to Pinterest
Labels: Me (Professional), Movies, travel