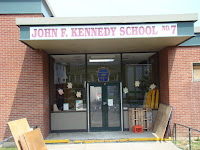 During Bill Clinton's first presidential run, one of his chief advisor (and dead-ringer for Skelator), James Carville, was famous for saying "the economy, stupid" as a way to keep the campaign focused on the issue(s) that matter the most.  I keep hearing that phrase in the back of my head whenever I read about the Scranton School District's (SSD) decades-long fiscal crisis.

By the way, it's less of a "fiscal" crisis than it is a crisis of ineptitude.

One of the things you read in the local press about the SSD's financial picture is the fact that the district is dramatically short-changed when it comes to state-provided funding.  That's actually true.  The reasons behind that are outside of my scope for this posting, but it's worth reading about if you're interested.  However, I think there is danger in focusing too much on the SSD's funding level.

Now, should the state funding formula be changed? Sure, it should. But placing too much emphasis on the income side of the ledger is an enormous mistake. Ask anyone who ever had excessive credit card debt: Additional income sometimes just feeds additional excessive spending.

Given the SSD's long history of horrible governance:
...I have absolutely no doubt that more money would have either resulted in simply delaying the current crisis or perhaps spawning even worse decisions making.  Think about it:  Would the no-bid busing contract have been challenged if the SSD were flush with cash?  Maybe yes, maybe no.  What is certain though is that the SSD would be under far less scrutiny, which would be a very, very bad thing.

By all means, Pennsylvania's public school funding policy needs to change, but for Scranton any more funding needs to come only with significant oversight attached.
Created By Stephen Albert at 9:27 AM