I still follow politics (more or less) in Scranton, and of all the races out there, the most interesting, by far, are those for open positions on the Scranton School Board.  With that in mind, here's a point of consideration for all you Scranton voters out there:

YOU ARE CRAZY IF YOU VOTE FOR ANY CANDIDATE THAT HAS A FAMILY MEMBER WHO WORKS FOR THE DISTRICT.

Granted that the mental health professionals out there (including my daughter Stinky) probably take offense to my use of the word "crazy" so how about "incredibly foolish" instead?

Here's my logic for the above:  When these folks take office and they have to vote for either...

a) The fiscal health of the District

b) The fiscal health of their family

...what do you think will win out in the end?  I can tell you who will lose...the taxpayers.  Yes, conflict of interest is a real thing, in spite of what many local politicians will have you believe.  Granted that the local school board in my neck of the woods isn't much better, although I'm reasonably sure that the president of our school board at least graduated from high school.  Now I know, the current Scranton School District board president Sheridan has a G.E.D., but just let that one sink in for a moment...the president of a school board failed to graduate from high school.  How is that not like nominating someone who dropped out of basic training to be head of the Joint Chiefs of Staff? 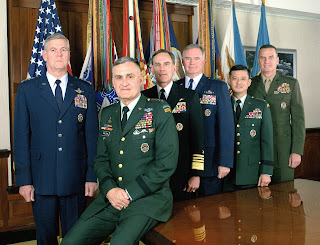 (The U.S. Joint Chief's of Staff; all completed basic training)

For the record, having a G.E.D. doesn't speak to president Sheridan's intelligence...or the intelligence of anyone else with a G.E.D. for that matter.  What it does speak to though is his (specific) commitment to life-long learning and fitness to lead an organization that is designed to deliver formal education to children.  Call me crazy, but I somehow think that the folks running an educational system should have a vested interest in...and committment to...education.

Speaking of the President of the Scranton School Board, he too has a conflict of interest (in my opinion), namely that he is also President of the Scranton City Democratic Committee.  Given the choice between doing what's right for taxpayers OR bolstering his political party, what will Mr. Sheridan do?  I don't believe that these kinds of conflicts arise all the time, but consider this scenario:  A less-qualified by highly loyal party operative is looking for employment in the district and finds an open position.  The competition for that position is someone who lacks local political connections but is better qualified for the job.  Who wins?  Come on now, we all know that answer, and the Scranton School District is saddled with yet another life-long, politically connected employee.  It's a perverse "Circle of Life" kind of thing, but this time featuring weasels instead of lions.

The Scranton School District is headed for a state takeover, and while painful, I also think it's necessary.  Simply put, the Scranton School Board is incapable, mostly by virtue of competence (as in the lack of), of managing its way out of the current and long-simmering financial crisis that stands at more than $33.6 million.  The current board did not create this crisis, and the Commonwealth of Pennsylvania contributed to it in a significant way*, but in the end, this same current board has continued a long history of mismanagement and nepotism that goes back decades in Scranton.  They choose not to make tough choices so tough choices will be made for the next board.

(*) There has been much written about Pennsylvania's public sector pension crisis, and I'll not add to that here, other than to say it's my opinion that the whole mess is a classic example of entrenched politics at it's very worst.  Legislators wanted richer pensions, and to get them they basically bought off the politically powerful teacher unions.  I don't blame teachers for getting better pensions; heck, who wouldn't want that?  Instead, this is a textbook example of why there shouldn't be career politicians in the first place.  Again, when personal interests of the elected compete with the public good, who usually loses?

Created By Stephen Albert at 9:30 PM