I am Locutus of Borg

Well, that's how I felt when I looked like this... 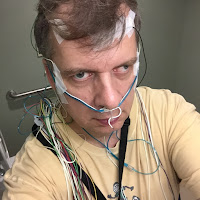 ...for the uninitiated (and non-Geeks) you can find out who the "real" Locutus of Borg was HERE.


So why all the (truly) wearable tech?  The photo was me, after getting outfitted for a sleep study that I had completed a few weeks ago.

Normally people undergo sleep studies if they, well, have actual trouble sleeping.  Me?  Seeing as though I never seem to do anything the easy (or simple) way, I had to go for a sleep study as the final step in a series of tests designed to figure out why apparently my heart had a rhythm and rate that were about as erratic as the Donald Trump Twitter feed (ooops....I promised to not post about politics in October; my bad).  I confess to not being happy about the whole prospect.  As I may have mentioned before, I actually sleep very well, so I was anxious at the prospect of this test.  Why?  The outcome could have been a diagnosis of Sleep Apnea, and I was not happy at the prospect of the resulting treatment plan, as that would mean me no longer sleeping well.

Getting through the test, all wired up as I was, was difficult.  It took a ton of concentration on my part, as I've never worked so hard in all of my life to actually sleep well.  It was, however, all for good as the diagnosis came back the following morning that 1) I don't have Sleep Apnea and 2) My blood oxygen levels at night are fine-n-dandy.  No c-pap Darth Vadar mask for me.  I was genuinely thrilled.

I am relieved at the outcome, but it still leaves the mystery as to why my heart started acting up at the beginning of the year.  Again, as I've noted in prior postings, I blame it on a daily habit of energy drinks, to which I can proudly state that I've not had any at all since this past January.  The strongest thing I drink these days is Earl Grey tea.  So far, after undergoing a Cardioversion in March, my heart seems to be doing very well, and my blood pressure has been great (aided in part by the loss of about 30 pounds).

There's a greater lesson in all of this, but I'm just not sure what it is, quite frankly.  The easy route would be to say the "can't take your health for granted" or the "getting old stinks" stuff, but I'll pass.  Both prior statements are true, but yet somehow I think there's something more.  Maybe one day I'll figure that part out.

Created By Stephen Albert at 10:01 AM