A Random Assortment of Crappy Things...

...that have happened lately.  Note that this isn't an all inclusive list.

Cold that has turned into Asthma issues.

Less than stellar feedback on a recent research paper for school.

An income tax bill that's more than the combined value of my first four cars.

Now in fairness there has been some good news as well.  Maybe just not enough for the mojo to remain in equilibrium.


I'm still get to be married to this lady.

I get another shot at research paper redemption Saturday after next.

I got some 'roids to deal with the Asthma...which means that I will gain temporary super powers but also become temporarily very greasy.

I'll confess that some of the above (on the bad list) was getting to me, but then some Facebook magic appeared in the form of this little ditty. 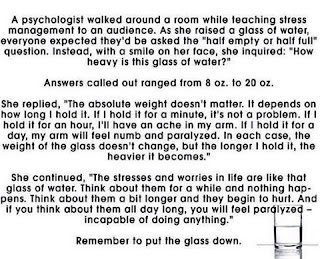 I need to remember to do a better job of "putting down the glass".

Created By Stephen Albert at 9:50 PM

Email ThisBlogThis!Share to TwitterShare to FacebookShare to Pinterest
Labels: C-S, Humor, Me (Professional), Me. Deep Thoughts