S L O W  D O W N...I've never been a fan of blogs/bloggers who talk about going "on hiatus" and stuff like that; for Pete's sake, we're not drafting a new Constitution...it's just a silly blog.  Anyway, I say this with the full knowledge that I just haven't been writing as much.  Now I should be writing more, as I don't have a graduate class at the moment, but sometimes, well, it's just not there.  Besides, I've been distracted by some personal health stuff, and quite frankly I just don't want to write about that any more than I already have, and I've already reached the point of it being nauseating.

New Vehicle...I've never, in my entire life, ever purchased a new vehicle.  Now I have purchased vehicles that were a year old and less than 10,000 miles, namely "nearly new".  All that changed on Saturday.  Actually it was going to change for a few months now.  Having a truck was something my wife and I have been thinking about (well me more than her) for a while now; we've been talking about getting some kayaks and having a truck would make actually using them far easier.  It's also nice from a home owner perspective.

The Big Sell...As noted above, I've been thinking about buying a truck, but I was leaning more towards something smaller than a full-sized model (think Nissan Frontier or Toyota Taco).  This past Saturday we had a few errands to run, so while running around we decided to stop at the local Nissan dealership just to see what they had in their inventory.  The answer was "virtually nothing", and not a soul came out to talk to us.  That was a mistake.  From there we stopped at a used car dealer my wife and I have both purchased vehicles from, but they had all of about two trucks.  Lastly, as we were leaving the Wyoming Valley Mall, almost on a lark we decided to stop by Valley Chevrolet to look at the new Chevy Colorado.  We were greeted within about 10 seconds of hitting the lot.

Fast forward three hours later and I'm less one Nissan Rogue and plus one 2016 Chevy Silverado.  Suffice to say we got a very good deal, and despite the usual new car sale gimmicky stuff, it felt like a good experience.  The vehicle has several nice features, but one was a must have for me:  A back-up camera.  The camera comes in a lot of the rental vehicles I drive, so I've learned to really appreciate just how helpful it is (especially when one suffers from "Walleye Vision" as I do). 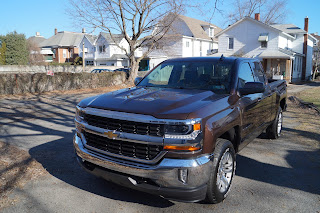 Introvert 101...I'm about as introverted as a human being can get without ending up in an institution.  Yet I've had something of a revelation.  Actually, as a side note, how cool is it that I can still have revelations at my age?  Anyway, I've discovered that while I don't necessarily like/enjoy/get energy from talking to other people, sometimes I need to.  It's that when I really, really get into my introverted self, things can get distorted, as if my thoughts end up folding in upon themselves. I kind of fall into a mental loop of sorts.  Having a quick, non-business conversation sometimes helps me clear my head...a kind of re-boot if you will.

Musicians Dying...Can we call a cosmic halt to all the musicians dying?  It's getting a little pathetic.

Politics...basically disgusts me these days.  Why?  Let me count the ways.

I don't think college should be free.  Now it shouldn't put someone into debt until they are age 45, but free?  Absolutely not.  If something is valuable, then it's worth paying and sacrificing (just a bit...) for it.  Making college free creates an entitlement that we just don't need in this country.  There goes one candidate.

Bill Clinton did more damage to the regulation of financial services companies in this country than every Republican president before and after him.   Call me crazy, but as a result I'm not keen on "round 2" with his wife.  There goes another candidate.

Mexico will not pay for a fence.  Muslims don't have the word "Muslim" tattooed on their foreheads, for ease of identification, either.  I don't want a president with more bankruptcy experience than me.  There goes another candidate.

Ted Cruz is a used car salesman.  And it's not a new car dealership...or even an upscale used car dealership...either.  I'm talking about some crappy little place with a trailer for an office, garbage in the back and plenty of beat up 2003 Hyundai's in the lot.  Skip.

Is Jeb! Bush even still running for President?

I could go on, but the point is made.

At this stage there is no one from either major party that even remotely appeals to me.


Created By Stephen Albert at 9:48 PM